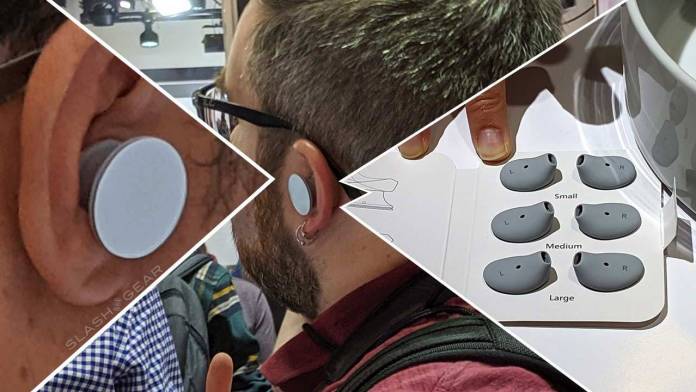 The newly-announced wireless earbuds from Microsoft, the Surface Earbuds, has gotten some initial rave reviews at the Microsoft Surface event in New York. While it’s not yet ready for commercial release, people are saying the sound quality so far is pretty good. And if you think only Cortana will work with it as a virtual assistant, you’ll be pleased to know that it will work with its competitors including Alexa, Bixby, Google Assistant, and Siri. It will also come with a companion app that has already been applied for a trademark as Surface Audio.

Unlike other wireless earbuds that are currently out in the market, the Surface Earbuds has a pretty unique way of fitting into the ear and pretty much “pretty large dots”. It may not look as polished as the others but according to SlashGear, you will get an “audio immersion experience the likes of which we’ve never heard before”. Even if it was in a pretty noisy environment, the sound quality was still pretty topnotch.

The earbuds can be connected to devices using Bluetooth and should work well with Android smartphones. They also mentioned an Android/Spotify integration so expect that they will be heavily pushing music content as well. There will be several gesture functionalities, taps, wireless charging with a USB case, and other usual things you can expect from wireless earbuds.

While it is a Microsoft product after all, you can also choose a different virtual assistant if you prefer others over Cortana, as per VentureBeat. They emphasised of course that it will still work better with Cortana but at least you still have the option of using a different one. They have apparently also applied a trademark filing for Surface Audio, the companion app to the earbuds. You will be able to control and customise the settings and the gestures, and even the assistant (although you can do that from the OS settings too).

The Microsoft Surface Earbuds will be available later this year and it will cost $249. So far, they’re showing off the white and medium grey colors but we’ll know later on if there will be more color options.