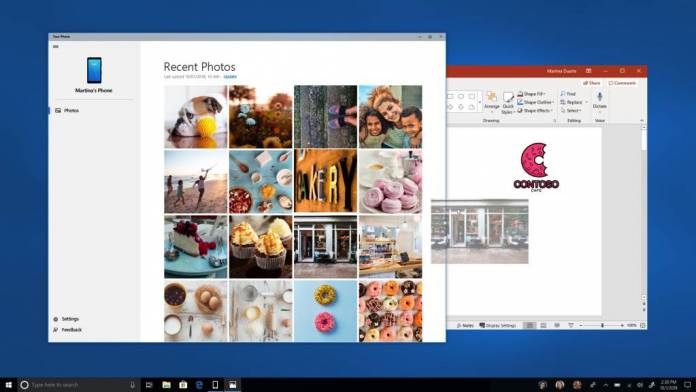 We’ve already seen what Microsoft’s Your Phone app can do when they unveiled it the Surface event last October, but now they have started testing it out through the Windows Insiders program. The “phone screen” feature, which basically mirrors what you see on your phone to your PC, will be rolling out to beta testers provided you have the latest test builds of Windows 10 and the Your Phone app itself. You will also need to be using supported devices to test out the app.

Basically, the feature mirrors your phone screen on to your computer screen. You’ll be able to see your installed apps and you can tap to access them to some extent in the remote season of your phone mirrored onto your PC. It is meant for PC users to embrace Android and bring mobile apps to your computer as well.

The Your Phone app can be accessed on any Windows 10 PC that is running Windows builds 1803 and above. It also needs to have a Bluetooth with Low Energy Peripheral mode which kind of limits the devices that can access it. In the Surface lineup, Surface Go is the first device to have this feature but later on, they will be expanding it to other devices as well.

The phone screen feature is also available for only a few Android smartphones, namely the Samsung Galaxy S8 and S8+ and the Galaxy S9 and S9+. Expect it to add more devices once the beta testing period is over although they didn’t give a timetable as to when this will happen.