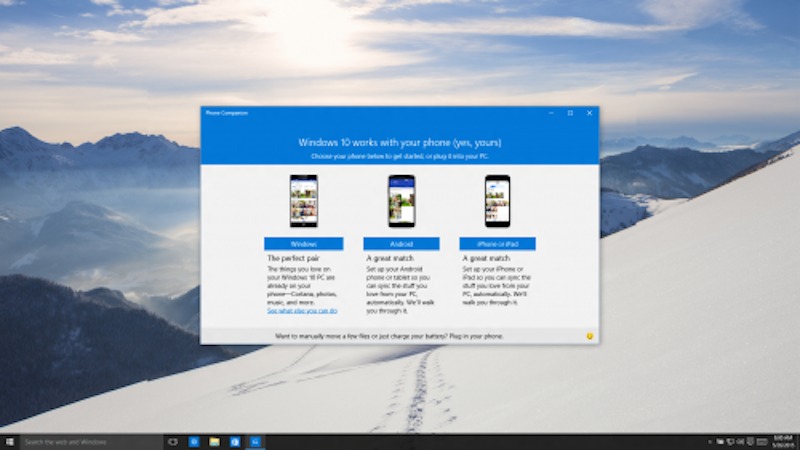 Microsoft knows that it can’t compete outrightly with Android or iOS yet. Windows Phone may already be out there but it still hasn’t captured a relevant percentage of the market. Instead of just trying to beat the two, Microsoft thought of working on a companion app for Windows 10 on PC that works to connect the computer to any phone whether it’s an iPhone, Android phone, and of course, a Windows Phone.

The Windows 10 Phone Companion app will be built-in to Windows 10 so you can easily connect your PC to whatever phone. It allows a seamless access and connection to content and files from your phone to PC or vice versa. The software giant saw the need to connect devices that aren’t even using the same platform so it came up with the Phone Companion app. The idea is to make Windows 10 able to connect with most devices since we know live in a multi-device world and people move between computers, tablets, and smartphones every single day. Most people want to bring their files with them stored on a device and the said app can provide a way for easy transition between devices.

The Phone Companion is only one of the several Windows Universal Apps Microsoft is developing for Windows 10. The goal is to bring smartphones and PCs optimal experience regardless of the operating system in use. This means your most important files and content can be accessed anytime, any day, and from any platform running on whatever device you have.

Phone Companion app will be built-in to Windows 10. It will connect your Windows 10-powered computer to any phone you have running Windows Phone, Android, or iOS.

How does this work? Simply set up the OneDrive app on your phone and your files can show up on your Windows 10 PC in the Photos app. It’s the same with the Music app, music from OneDrive can also be accessed. Any music playlist you have on your PC can be accessed on your mobile device. When you use OneNote or Office on your computer, any note and document will also show up on your smartphone.

Windows 10 will also include Cortana. The OS set to launch this summer will also bring the first personal digital-assistant who can work across your phone or tablet and your computer. Cortana is not new to Windows Phone but this is the first time it’s integrated on a Windows 10 PC and a Cortana app will also be available for iOS and Android phones. This means you can get more things done because Cortana is integrated into most of your devices now. The mobile app version of Cortana will work as a companion to the Windows 10 PC version.