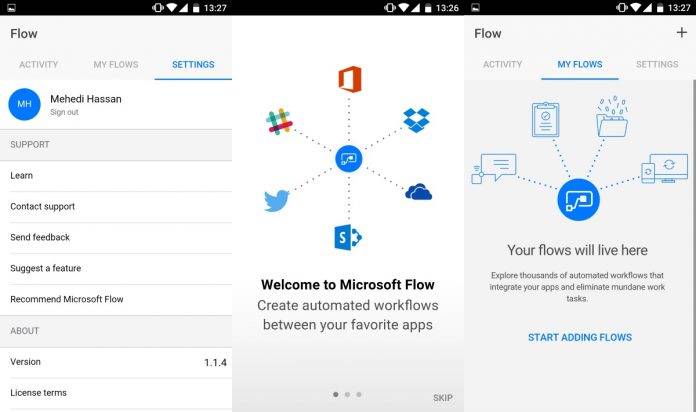 At one point or another, you have probably used IFTTT to make your digital life easier. But if you’re looking for something similar but a bit different, you should definitely try out the Microsoft Flow app, which is actually still in an unreleased version. But now, they have now released an update to the Android version which should give you more new features, including the ability to create flows from templates while on mobile and a better way to search for and browse the different iterations you can create for your own workflow process.

A lot of us probably don’t just use one set of apps from one developer to be able to create the various workflows we need to be more productive. That’s why something like Flow can come in handy to make the processes easier. Now with the update, you don’t have to create a Flow from scratch as you can now look at templates and then connect to new services as needed. You can also now edit, rename, and delete existing flows on your mobile device.

It’s also now easier to search for flows and services that are included within the app. You can browse all the templates and connected services available by categories, so even if you don’t know exactly what you’re looking for, you can look through all that’s on offer. You can use key words to search for these things in the Quick Search box.

Of course there are the usual bug fixes expected, and since the app is still in beta, it’s best to remind yourself that it’s not as stable as other apps that have been officially released. You can update your Microsoft Flow app through its Google Play page.