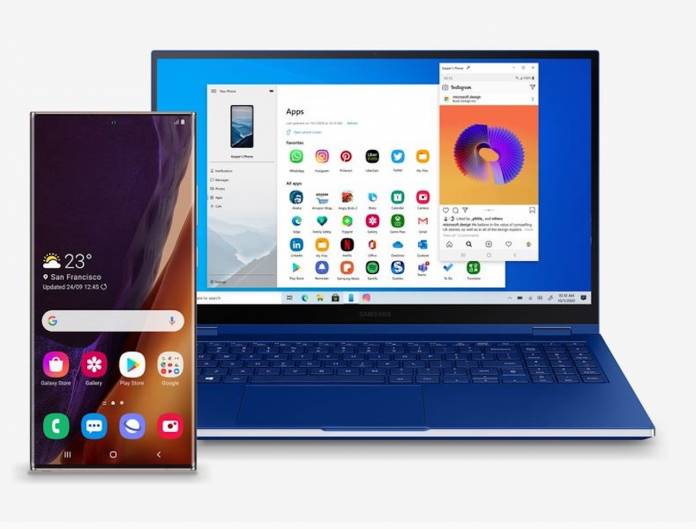 The partnership between Microsoft and Samsung has brought a lot of good things to those who use devices from the two tech giants. The Your Phone app and the Link to Windows integration has been one of the best things to happen if you have a Windows 10 laptop and a Samsung smartphone. Now with the arrival of the Samsung Galaxy Note20, we’ll see more tools and features so you can seamlessly work on your laptop without having to bring out your smartphone every once in a while.

Currently, you can already do several things from your Samsung smartphone to your Windows 10 laptop or computer even if the former is in your bag or just on your table but you won’t touch it (at least not that much). You can take calls, check your notifications, see photos, and read and send messages. You will also now be able to access and interact with your mobile apps on your computer.

Launching an app will open it in a separate window so you will be able to multitask and do other things on your computer. You will also be able to pin your Android apps to your computer’s taskbar or your start menu so you can access them quickly. It will initially be available with the newly-launched Galaxy Note20 but other Samsung devices will also get the functionality. You’ll also be able to see your apps through the Your Phone app, launch any mobile app from the PC.

The Galaxy Note20 will also be integrated closely with Microsoft 365 apps. Soon you’ll be able to sync your notes from your phone to your OneNote in Outlook or OneNote as an image. Samsung Reminders can also be synced from the phablet to your PC on Microsoft To Do, Outlook, and Microsoft Teams so you can edit and add across devices. Meanwhile, Outlook integration now includes Samsung Galaxy smartwatches and they’re also bringing the Play My Emails function to Android devices.

Lastly, the Galaxy Note20 will get XCloud game streaming or cloud gaming with the Xbox Game Pass Ultimate. We don’t know yet if all the other features mentioned above will also eventually be available to other Samsung Android devices eventually.