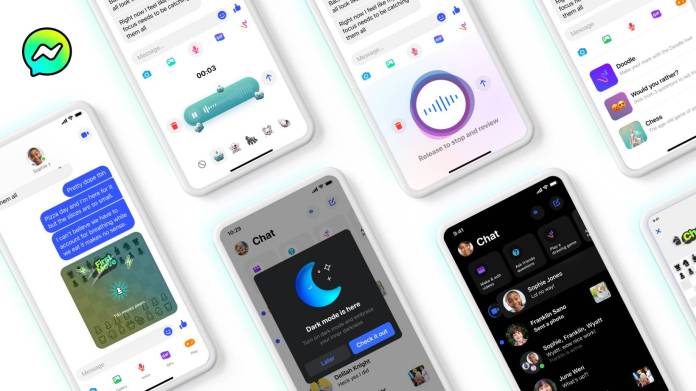 Even though Meta has been constantly criticized over how their platforms bring harm to younger users, products like Messenger Kids are being developed and pushed. The messaging app for kids (supervised by parents of course) is getting a new update bringing some features that should make it more fun for kids to use. The Dark Mode is finally rolling out for the app and users are also getting voice effects for audio messages and an easier way to start games within the chat itself.

Dark Mode is of course one of the most requested features on all apps for the past few years. And while kids should not be on the Messenger Kids app late at night, which is when the dark mode is most useful, it’s also good to have this theme option to cut down on the glare of the phone and protect their eyes, especially during low-light situations. Even though it uses low brightness, it still maintains contrast and vibrancy. To turn it on, go to the settings and choose Dark Mode. It can also be turned on and off anytime.

Audio voice messages sent through Messenger Kids will now get a little crazier as they are adding voice effects. Kids can sound like a robot, ghost, gorilla, or mouse, or they can sound like they are talking into a seashell. To record a voice message, tap on the voice mic icon then press and hold to record. Before sending, you can choose from among the five voice effect options to add to the message. For now, this is only available for iOS but Android will be coming soon.

Messenger Kids is also now making it easier for kids to play two-player games with their authorized friends. Previously, they could only start a game by leaving the chat and going to the Explore tab and then choosing one to play with who they’re chatting with. Now, kids can start a game by tapping the orange controller “Play” tab within the chat thread. Some of the games they can choose from are chess, tic-tac-toe and “Daily Doodle”.

Social media apps created specifically for kids, especially within the Meta-verse, are often met with suspicion and criticism. Still, there are more than 7 million users of Messenger Kids and Meta continually tries to assure parents that they’re keeping their kids safe on the platform. Whether or not they believe it depends also on the parents’ experience with Meta products the past years.