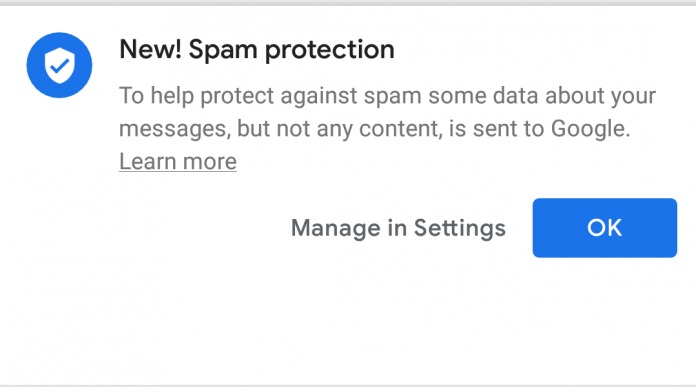 Spam messages are still pretty much a problem, or at least an annoyance at the very least, whether it’s on your email or your SMS. So having apps that offer you spam protection us always a plus. Messages, formerly Android Messages, was rumored to be offering such a service based on leaked builds for an upcoming update. Now it looks like it’s already rolling out for some users, although of course there may be some privacy concerns for some who are concerned with keeping some of their information away from Google.

If you’re one of the lucky users in this first wave of updates, you’ll see a notification that tells you that you now have spam protection available. You can toggle it on and off through the advance section of the settings menu of the app. The update seems to be a server-side one and will be rolling out in waves so if you don’t see it yet, don’t panic because it will eventually get to you probably.

How does the spam protection work? Once you enable it, Google will get some of the information from the messages that you receive. But of course it strips it off some identifying content like your phone number and even the actual message itself. What it does is it will look at the data statistically and detects the commonalities between spam messages to identify if it is spam or not.

Remember though that if you report a message as spam, it will submit the full message to Google which of course includes your phone number, the number of the sender, and the full message itself. Not everyone will of course want Google to have that or to even use the Spam Protection feature of Messages.

If you still want to continue using Messages, you can disable spam protection by going to the aforementioned Advanced settings and toggling it off. Or you might want to also use a different messaging app if you really don’t trust Google, although of course the fact that you’re using Android may mean you somehow trust the tech giant.