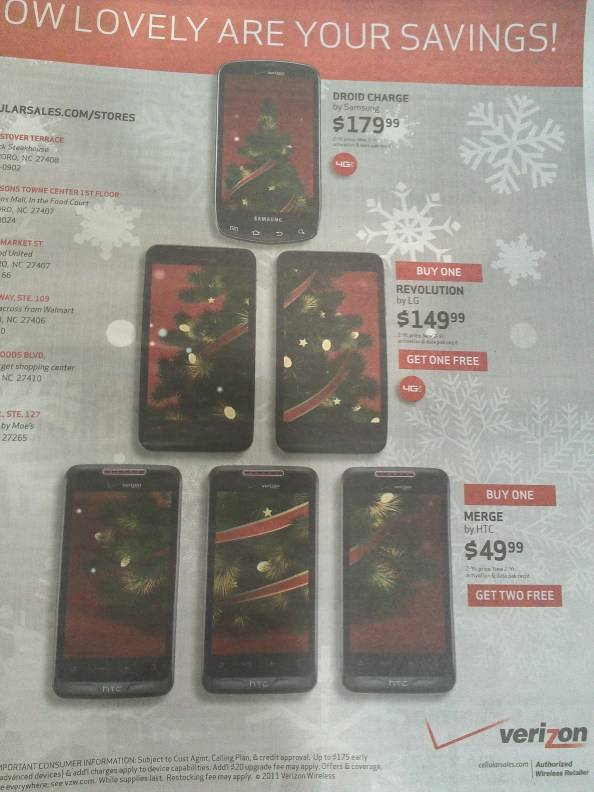 Well there’s something we didn’t expect to see. You might remember the HTC Merge from early this year, when it was announced in February and briefly stopped by the FCC with Verizon bands. While a few regional carriers picked up the QWERTY phone, its debut on Big Red has been long delayed -until now. The folks at AllTechEverything spotted the phone at the bottom of a Verizon Christmas tree in a recent ad, alongside the Samsung DROID CHARGE and the LG Revolution.

This isn’t a confirmation by any means – it could simply be a mistake on the part of the advertising team. In any case the Merge is quite outdated at this point, as it’s essentially a slightly updated version of the G2 with a Sense suite. Just to refresh your memory, the Merge comes with an 800Mhz processor, a 3.8-inch 840 x 480 LCD screen and Android 2.2 Froyo. Assuming the Verizon release is imminent, it might be upgraded to Gingerbread and it might not; AT&T released the brand new Samsung DoubleTime running 2.2, after all.

The phone in the ad is yours for $49.99, and comes with two free Merges to boot. That’s an impressive deal for families, if you can actually find somewhere to redeem it – the ad in question was found in North Carolina. It might be worth considering if you live in a non-LTE area and don’t feel like upgrading to the similar Samsung Stratosphere for $50 more. But once the Motorola DROID 4 is released, probably some time between now and Christmas, it’ll be hard to reccomend any other QWERTY phone on Verizon’s lineup.