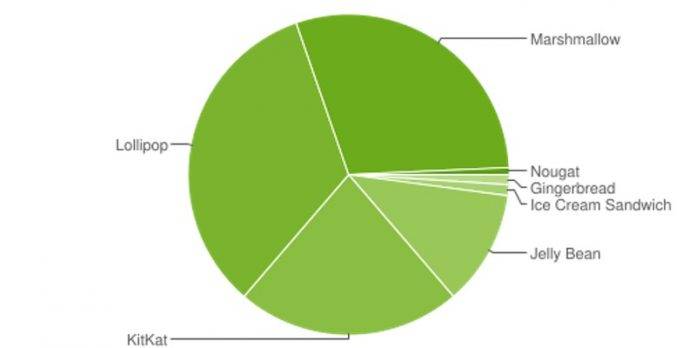 A new quarter has started and we are looking forward to know how Android distribution changed the past few months. Lollipop is still on top just like the previous year. It has long been king in the mobile game but we have a feeling it will soon be overtaken by the fluffy Marshmallow as the gap is narrowing between the two Android OS versions.

Developers need to know the numbers because such information help them where to put their efforts. It is important to know what version of Android most people are using so they know what to prioritize. It also helps to identify what devices or screen sizes are most popular and are widely used in the world today.

The whole Google Play and Android ecosystem is very big. It continues to grow each month so devs and OEMs should be updated with Google Play Install Stats. The Android dev team recently shared the Android Distribution numbers and we learned that Marshmallow has already captured 29.6% while Lollipop still has a total of 33.4% distributed between the Android 5.0 and 5.1 versions. Android Nougat 7.0 and 7.1 together only have 0.7%. That is less than one percent after a few months of release.

Android KitKat still holds 22.6% of the market while Jelly Bean (4.1, 4.2, and 4.3) still captures 11.6%. The old Ice Cream Sandwich and Gingerbread are down to 1 and 1.1%, respectively. See that Froyo was removed from the list. We’re assuming that there are only very few people on Froyo.

When it comes to Screen Sizes and Densities, about 36.8% of Android users are using normal sized screens with hdpi density of 240dpi. Note that the devices are categorized according to screen sizes (small, normal, large, and xlarge) and densities (ldpi, mdpi, hdpi, xhdpi, xxhdpi, xxxhdpi).