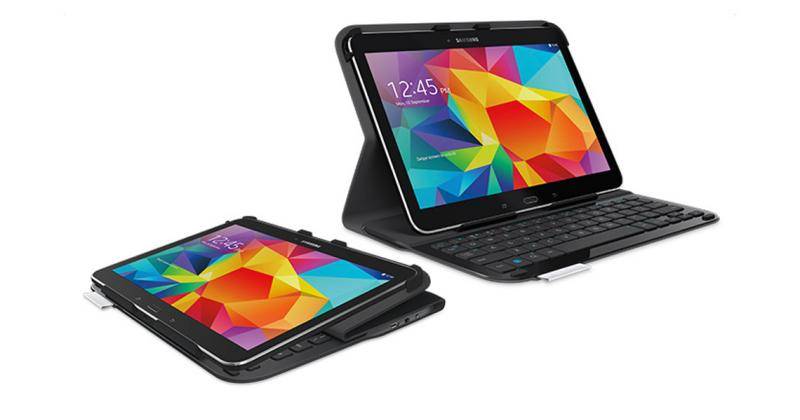 Samsung‘s Galaxy Tab 4 lineup has just hit the market, but if you’re already worried about your 10.1-inch Galaxy Tab 4, then this somewhat pricey accessory might be for you. Logitech‘s ultrathin folio not only covers up your tablet for protection but also offers a keyboard for productivity on the go.

The three Galaxy Tab 4 tablets were formally revealed on April 1, never a good day to make an announcement you want to be taken seriously. The largest of the three is, of course, the 10.1-inch variant that, though big, sports the same mid-tier specs as the smaller models. That means a 1.2 GHz quad-core chip, 1.5 GB of RAM, and in the case of the 10.1-incher, 16 GB of storage and a hefty 6,800 mAh battery.

It may not be the most premium device out there, but you’re not likely to treat it without care. Logitech’s offering tries to keep your device safe and snug without overburdening your hands or bag with unnecessary weight. A key feature of the folio cover is, of course, the Bluetooth keyboard attached to it. Logitech claiims that the keyboard will last for three months on a single charge, after which it can be revitalized via the usual USB cable. Like similar covers in the market, Logitech’s folio case lets you prop up the tablet in a either an almost upright position, for using the keyboard, or an almost supine orientation.

Logitech is asking for a price that might make some think twice. The case, when it becomes available this month, will sell for $99, quite a bit pricey for an accessory, even a premium one at that. For comparison, the Galaxy Tab 4 10.1-inch was marked to retail for $350, making the cover a good third of the actual device’s price. Logitech, however, isn’t one that easily skimps on quality so it really boils down to how much you’ll be willing to pay for a cover that protects your tablet and also gives you a keyboard when, and if, you need it.