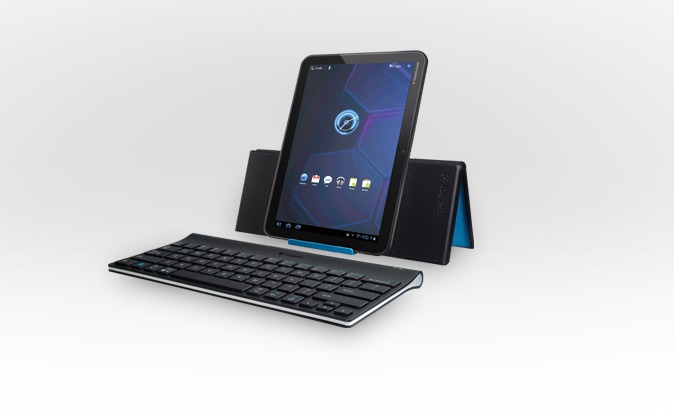 Logitech has recently outed a few new accessories coming to their long list of well made keyboards and mice. They now have a pre-order page live for all those that need the convenience and ease of use of having a bluetooth keyboard and or mouse for their Android Tablet. We all know Logitech makes some of the best stuff so I have no doubts on build quality. With media and volume controls and all, I sure want the keyboard for my Xoom.

I’ll start with the Logitech Android Keyboard it connects via bluetooth and even comes with the fancy case you see in the photo. The case doubles as the stand, and it seems they designed in pretty well. It isn’t cheap, but available for pre-order now starting at $69 and should be a great addition for any tablet owner. I’m wondering if it would work with the Galaxy Tab or other tablets with bluetooth that are not running 3.0 but I doubt it.

Next up is the Logitech Android Mouse it connects via the same way as the keyboard and that is over bluetooth. It comes with a micro fiber carry pouch for those that like to keep things in their case. Logitech said the keyboard and mouse should both work up to around 30 feet away from the device, but may vary by use environment. It will run you a pretty penny also starting at $39

Stay tuned for more as they plan to also release a speaker dock and a few other things, we will update once these start shipping, and hey they might even work with your Google TV once it gets updated to Android 3.1 but we wont know til they launch.