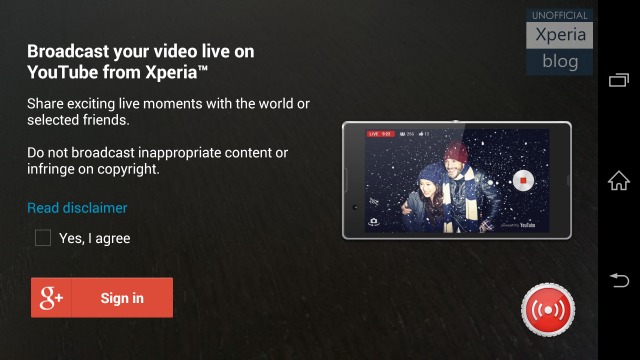 We talked about this cool app a while back, which allows Sony Xperia device users – in actuality, it was initially just for the current flagship, the Sony Xperia Z2 – to broadcast live video over their Youtube channel. An update for the “Live on Youtube” app has just rolled out from Sony, and we’re getting news that more devices are supported.

The standard requirement is still that the app will only run on devices running Android 4.4 Kitkat, and that the user needs to have a Youtube channel (for very obvious reasons). But the device roster has been updated to include the Sony Xperia Z1, Xperia Z1 Compact (a late addition to the changelog) and the Xperia ZL2. Now users for these three other Sony devices can do their own webcasts straight from their phones.

The app works by taking 15 minutes of the video feed from the Xperia devices’ cameras – very capable cameras at that – and broadcasts it live on the user’s Youtube account. There are two modes of the app – the public one where you can share the feed’s link on social networks so that the whole world (well, potentially) would be able to see your video. You can also use the private feed and just pick the people you want to share the feed with, maybe just to members of your family.

The rest of the update, according to Sony, are just minor bug fixes and performance enhancements. We still need to remind users that the caveat to this app is that they will need to turn on the “live feature” setting on their Youtube account for the app to work. There are also countries and places where Youtube is not available, and there is also a restriction on the usage of the app in Germany.