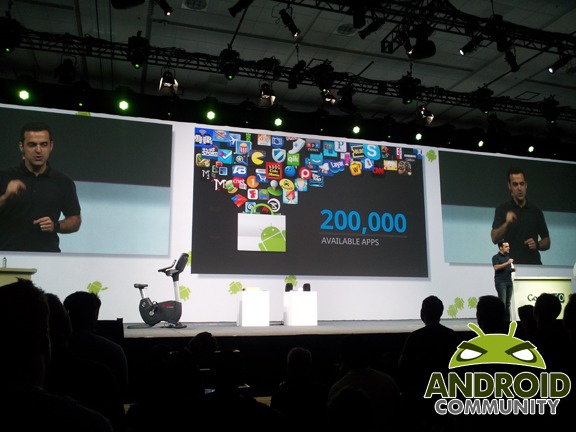 Vic Gundotra was the first person to step on stage at Google I/O this year, his speech beginning with talks about the history of the conference. He basically instantly sent a fight call out at Apple with a lovely illustration of an Android eating a piece of well-chosen fruit. He went on to talk about viewing parties taking place now all around the world, regardless of the time. The first person Gundotra called on stage spoke on how 100 Million Android activations have taken place worldwide. The three main points of the keynote were three M’s: Momentum, Mobile, and More.

The speech continued here with impressive statistics like 400,000 Android devices activated every single day, 200,0000 available apps in the Android Market. Pulse, Gun Brothers, Tap Tap Revenge, and more are name-dropped to show how the greatest apps are being delivered on Android. App installs have reached 4.5 billion since the beginning of the platform, the amount of installs increasing exponentially each day.

Of course this was the “Momentum” portion of the keynote. This piece of the puzzle wrapped up quickly on account of the 50 minute speech needing to contain one monster amount of information – so fast, so fast! Long story short, Android is doing VERY well and shows absolutely no sign of slowing down in the near future.