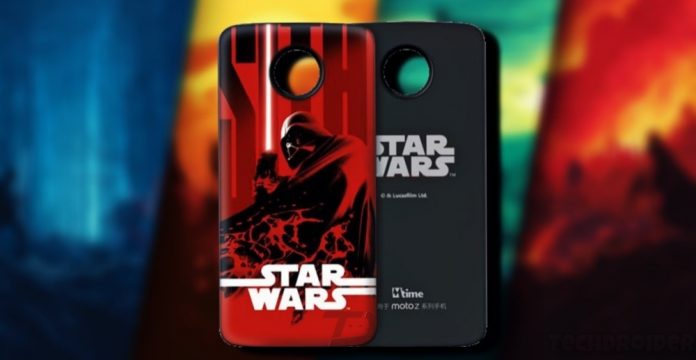 Star Wars fans who live in China, listen up: the Force will become stronger over there in the next few weeks as one OEM is releasing a limited edition Star Wars accessory for your smartphone. As we await the arrival of Episode VIII of the movie franchise, we, of course, expect various brands and apps to ride on the bandwagon (if they have the budget for the licensing fee) and Motorola is no exception. The Star Wars Moto Mod will soon be available for Moto Z owners. Unfortunately, you have to be in China to get one.

The good news is that the Moto Mod looks amazing, with Darth Vader and his signature red lightsaber, even though he probably is not in the upcoming movie. But that doesn’t really matter if you’re into collecting all sorts of Star Wars stuff. The bad news is that this Moto Mod doesn’t turn into a lightsaber or anything fancy like that. It just makes the back of your Moto Z phone look nice. And the Style Shell mod is actually more decorative rather than protective.

The other bad news is that it will only be available in China. If you know anyone there or if you can find a retailer that will ship to wherever you are, then good for you. The recently announced OnePlus 5T Star Wars Edition will also be available in India only, so those who live in other parts of the world that are not Asia are probably sad.

But if you are in China, then the limited edition Star Wars Moto Mod can be yours for just 129 yuan or roughly around $20. It will probably be available in the next few days so we’ll also know if you can buy it in other markets.