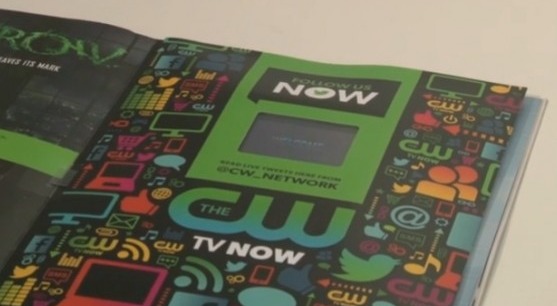 Who says print media is dead? Entertainment Weekly has put out a limited edition version of their magazine that features a functioning Android smartphone embedded in one of the pages, as reported by our friends at SlashGear. Let that sink in for a second; an Android device embedded in a magazine. It sounds like something out of a scifi movie.

The device has a 2.3-inch screen that displays commercials for upcoming CW TV shows. Commercials cover upcoming shows such as The Arrow and Emily Owens, M.D. After a couple of ads, it links to a live version of CW’s Twitter page. That means the device is connected the Internet at all times, and upon taking the device apart, it turns out there is a T-Mobile sim card installed.

As far as the insides of the device, it is appears to be a gutted ABO 810, a budget smartphone running Android 2.2 FroYo. If a user were to go and buy a similar device it would set them back around $40. The device is chargeable and can be tinkered with by more adventurous users.

Clearly, this ad is working. Android Community and almost every tech site on the Internet is talking about it, which is clearly brining CW the attention the ad is seeking. Does this mean we will see more ads like this in magazines? Probably.