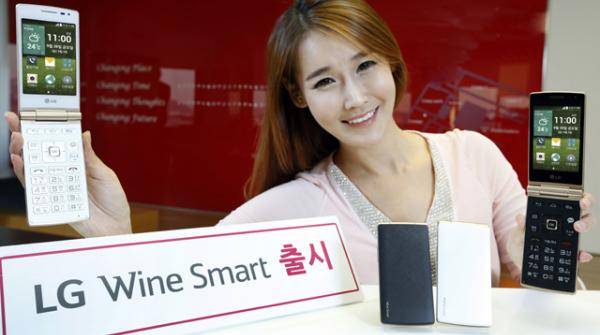 Like it’s chief rival, LG is getting back into the presumed extinct clamshell form factor. Unlike that said rival, however, the LG Wine Smart is groundbreaking, at least for LG, since it is the company’s first smartphone to bear that form ever since the it launched its Wine series back in 2007.

For quite a time, and longer in the US, flip phone or clamshells were en vogue. You’d see them everywhere, including as TV or movie set props. The arrival of the iPhone and its singular, flat body finally put the nail in the coffin, but some companies, particularly Korean ones like Samsung and now LG, have tried to keep that style alive today. While Samsung has been churning out at least one, sometimes two, such smartphones a year, this is LG’s first jab at a flip smartphone. Unlike some of Samsung’s models, however, the LG Wine Smart is clearly designed for a mid-tier market and one that caters specifically to elderly users.

The specs definitely betray that fact, with a 1.2 GHz quad-core CPU, 1 GB of RAM and 4 GB of internal storage that can be supplemented via a microSD card. The screen is a 3.5-inch LCD with a resolution of 480×320. Not is it only low, it also stands alone, unlike the dual-screen setup of Samsung’s equivalents. It does have two camera though, an 8 megapixel at the back and a VGA on the front. The 1,700 mAh battery is removable and replaceable.

The LG Wine Smart has some features designed for older smartphone users, aside from the obvious presence of physical keys, of course. There is a “Safe Keeper” function that will automatically send out an emergency notification, along with necessary information like the phone’s location, to pre-defined numbers in case the smartphone is unused for a set period of time, which could be an indication that something is not right. Amusingly, there is also a dedicated physical button for launching Kakao Talk, presumably because everyone in Korea, even older people, know how to use the instant messaging service.