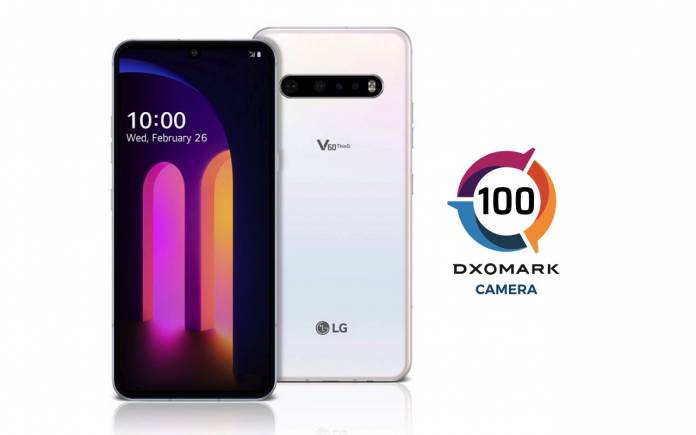 We haven’t heard anything about the LG V60 ThinQ since March when the phone’s features and specs were further detailed in a video. We know the 5G variant was made available in the United States via Verizon, AT&T, and T-Mobile. A teardown analysis presented how the phone is easy to open and repair. The phone is powered by a 5000mAh battery and comes with a slew of impressive features. When it comes to camera performance, DxOMark has finally analyzed and reviewed the LG V60 ThinQ 5G.

Let’s review the camera specs and features first. There are three rear cameras headlined by a 64MP primary camera with f/1.8-aperture lens, PDAF, and OIS. It is joined by a 13MP Ultra-wide sensor with f/1.9-aperture lens and a 0.3MP ToF 3D sensor with f/1.4 aperture lens. The whole system comes with Dual-LED dual-tone flash. The phone can do 4320p/30fps video recording.

The LG V60 ThinQ 5G Camera has received an average score of 100 from DxOMark. That’s decent, placing it alongside the Xiaomi Mi 9 that was reviewed in February last year. It’s ranked 16th on the list.

The phone offers a number of good things when it comes to mobile photography. It delivers wide dynamic range under indoor or bright light conditions. Expect to see accurate white balance, good detail, and pleasant color in bright light.

The ultra-wide camera allows a very wide field of view and good exposure in flash-on mode. Unfortunately, you may also notice the following: noise in all lighting conditions, noise and lack of detail in ultra-wide shots, and loss of texture in faces when using bokeh mode. Also noticeable are incorrect exposures in flash-auto mode and lack of detail in long-range zoom shots.

When it comes to video recording, the phone promises swift autofocus adaptation, mostly accurate exposure, and effective stabilization of camera shake. You will also notice a mostly accurate white balance in bright light and indoors.

As for the disadvantages, take note of the hue shift, limited dynamic range, low contrast at times, and low level of detail and occasional local loss of texture. When panning or walking while recording, stabilization is ineffective.