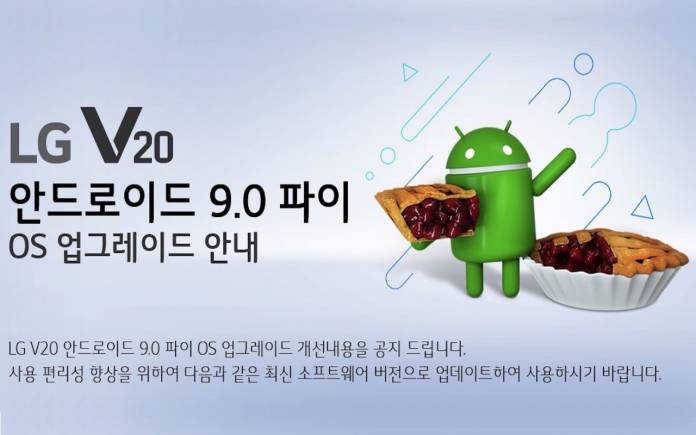 Android updates are rolling for the LG V20 and LG G8. They will receive different versions as the V20 will also get a slice of Android 9 Pie while the LG G8 will get Android 10. No more sweet reference to Android 10 which was previously thought to be Android Quik or Android Quiche. The Android team simply settled on numbers for easier recall. Our last mention was of the LG V20 and that an official upgrade would be no more. That was months after the phone took a bite of the Android Oreo.

The LG V20 is an old model from 2016. It launched with Android Nougat which means Android Pie is already the second major upgrade after the Android Oreo version back in September 2018. This Android 9 rollout is said to be the final release as the phone won’t get Android 10.

With the Pie update, the LG V20 will fully upgrade the system to Android 9 Pie. Some new additions include support for gesture navigation, setting to adjust media volume, Google’s Digital Wellbeing features, new battery savings feature, screen rotation button on to the navigation bar, plus individual controls for background applications. The screenshot preview has been moved to the bottom right of the screen.

Other changes include a new security measure to prevent the phone from being powered off when locked, new lock icon display setting for security, new ‘Sunset to sunrise’ setting added to the comfort mode, plus a new dual app feature that lets users use multiple accounts on the same app. Once the LG V20 is upgraded to Android Oreo, you can also start managing WiFi control permissions and manage folder access for every app. The home screen’s placement has been fixed while SD card encryption has removed the limitation.