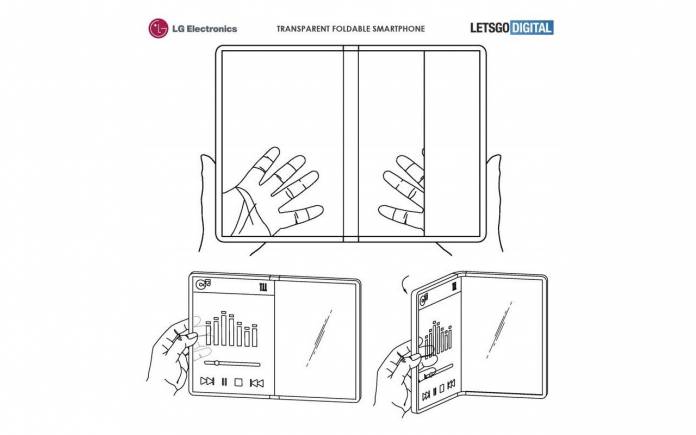 The LG foldable phone was said to be in the works when a patent application surfaced last year. And then we said the LG foldable and flexible phone may not be announced at CES 2019. No LG foldable phone was introduced and we don’t think one will be shown off anytime soon. What we have now are simply rumors and patent illustrations that show a different type of screen. The images illustrate a flexible transparent display that could probably usher into the world where windows and mirrors work as proper touch displays.

LG is believed to be working on transparent displays. The last TV announced during the CES 2019 was shown with 40% transparency. There’s also the flexible and transparent 77-inch 4K UHD OLED screen.

That’s on a bigger scale but LG wants to use it on a transparent phone with a flexible and foldable phone design. This time, LG has published a patent thru the USPTO (United States Patent and Trademark Office).

The document only shows a ‘Mobile Terminal’ patent plus this transparent foldable phone. The patent shows fullscreen displays on both sides.

The transparent display can be folded. We’re assuming it’s a book-type design based on the drawing. The display could be see-through because the hands can be seen.

It appears to be one crazy idea but it’s just that–a concept. There is a possibility the display can be touch-controlled from the back too. That’s an interesting take on the new screen but we’ll have to see this become a reality first.

The next Android phone from the company could be this Foldable Flexible Transparent Phone which appears too good to be true. The transparent flexible OLED display is another special product by the LG Display division. LG isn’t just content with a flexible display. Making a transparent one makes it all the more special albeit we’re not sure when it will be ready. It could be just a concept but it’s not far from becoming a reality. We’ll see.