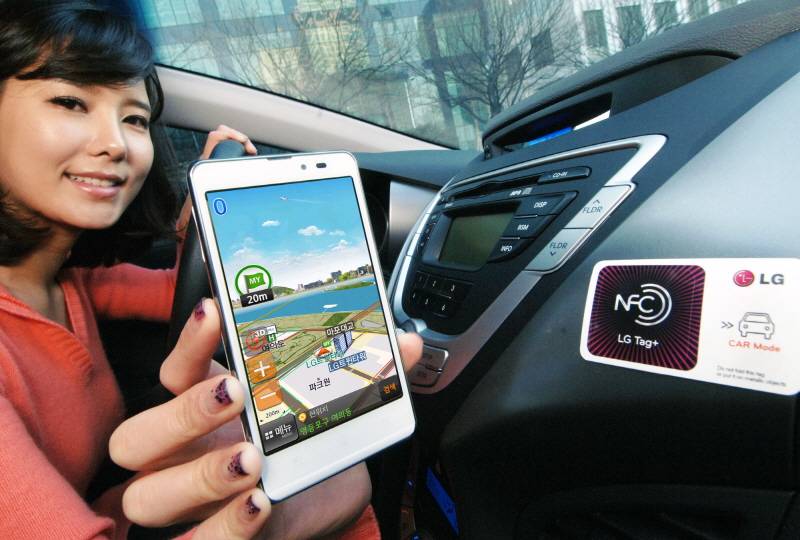 LG’s second new Android smartphone for Mobile World Congress is the LG Optimus LTE Tag, and the company is hoping you’ll get into the habit of tapping it against your dashboard. A 4.3-inch 1.2GHz dual-core handset – that looks, almost ridiculously so – like Samsung’s Galaxy S II – the Optimus LTE Tag includes both 4G LTE support and a few sheets of sticky NFC labels that can be used to switch the smartphone between various modes.

So, stick the Car Mode tag – which LG calls LG Tag+ – to your dashboard, and when you hold the Optimus LTE Tag against it, it’ll automatically load up the in-car UI. When you’re going to bed, a silence mode tag on your nightstand can automatically shut off the ringer and any other alerts, so that you won’t be disturbed.

All of the Tag+ actions can be customized, and some of the stickers are seemingly left “blank” for users to program their own macros. Other hardware details of the Optimus LTE Tag are left mysterious, though it has a front-facing camera and unfortunately runs Android 2.3 Gingerbread rather than Ice Cream Sandwich. Unlike the Optimus Vu, LG hasn’t given a definitive upgrade window for Android 4.0 on the Optimus LTE Tag either.

LG will likely tell us more at MWC 2012 next week, so join us for all the details on the company’s new range when we hit the Barcelona show!