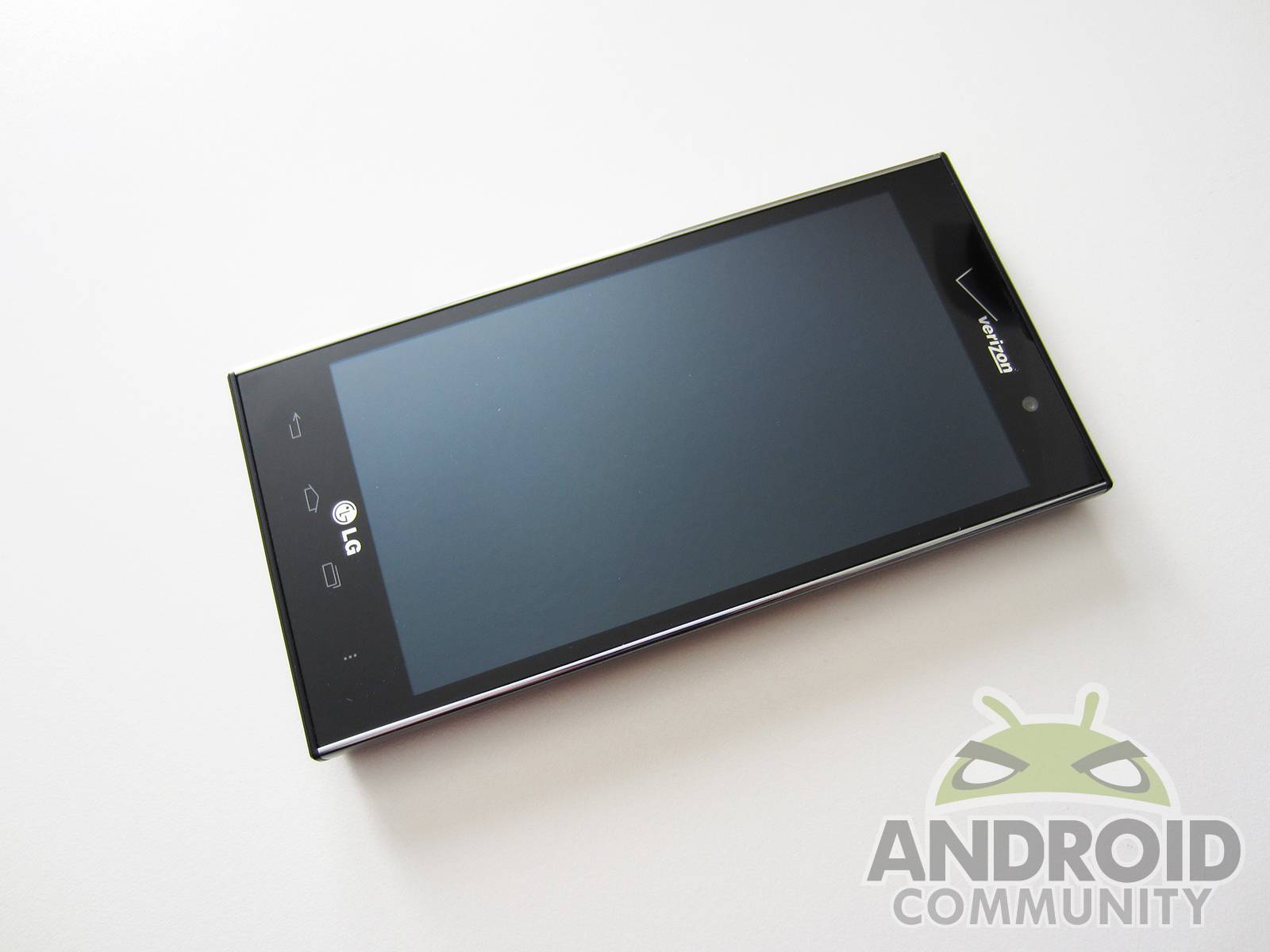 Mid-range smartphones are a mixed bag — most of them are decent, but at the end of the day, they usually still leave something to be desired. However, every once in a while, a mid-range device will come along that’s worthy of its accolades and has flagship specs at a budget price. The LG Spectrum 2, which is available now at Verizon for $99, seems to be one of those devices. It’s based off the LG Optimus LTE II that was released in Korea earlier this year. LG and Verizon made a few changes to the design and specs, and ended up spitting out the Spectrum 2 to US users. The phone sports a Qualcomm Snapdragon S4 dual-core chip, 1GB of RAM, a 4.7-inch 720p HD IPS display, and even NFC and wireless charging capabilities — not a bad combination of features, but we have to see if the handset can use them advantageously. Let’s find out what this thing is capable of.

The Spectrum 2 is a beast of a phone, both on the inside and outside. It’s 4.7-inch screen makes the device a huge object to hold. Obviously, it’s not as big as the phablet-style smartphones like the Samsung Galaxy Note series or the new DROID DNA from HTC, but if you’re upgrading from a smaller device, there will be a lot to get used to since the Spectrum 2 has a much larger footprint. 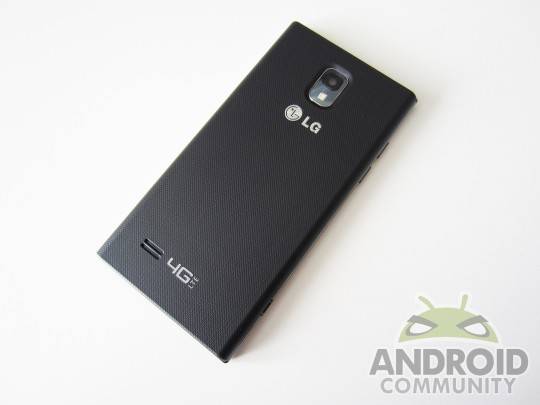 At 0.36-inches thick, the Spectrum 2 is still fairly thin, but it doesn’t beat out most of today’s handsets — most of which are a few hundredths of an inch thinner. That’s not a big difference at all, but the sheer size of the phone gives you the illusion that the phone is a lot thicker than it really is. However, the added thickness makes it little easier to hold in your hand compared to some other handsets that we’ve played around with.

On the inside, there’s a Qualcomm Snapdragon S4 SoC (MSM8960) that combines a 1.5GHz dual-core Krait processor with Adreno 225 graphics — the same chip that’s in Samsung’s flagship Galaxy S III smartphone. Unlike it’s international brethren, the Spectrum 2 only has 1GB of RAM instead of 2GB, but it has 16GB of internal storage that can be expanded with a microSD card. It also has a big 2150mAh battery that LG says will provide over 10 hours of talk time and almost 20 days of standby time. On the back there’s an 8MP shooter capable of recording 1080p video, with a 1.3MP front-facing VGA camera for video chatting.

The 720p HD IPS display is one feature that I liked the most from the Spectrum 2. It has a pixel density of 312ppi, which is right up there with the Galaxy S III and the HTC One X. The display offers insanely great touch responsive, and the viewing angles are pretty fantastic as well. Text, images, and HD video were crystal clear and very sharp. I definitely wouldn’t go as far as saying that the Spectrum 2’s display is one of the best, but I guarantee that it won’t get many complaints. 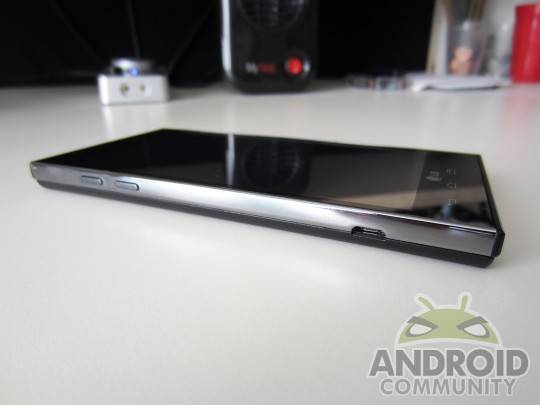 The buttons and ports on the Spectrum 2 are fairly standard, although there are a few distinct differences from what you would traditionally see on an Android device. First, the volume buttons are actually two separate buttons, rather than just one rocker button. While it’s only a discrete change, it gives the Spectrum 2 a point boost in the looks department. The power button is also surrounded by a blue LED notification light, which is also a pretty discrete feature, but it definitely adds to the sleekness of the phone’s design. The four soft buttons at the bottom are also illuminated by blue LEDs instead of the traditional white LEDs that you see on most handsets, which definitely sets the Spectrum 2 apart from the crowd looks-wise. Other than that, you have you your headphone jack on the top-left and the microUSB port on the left side towards the bottom, with the speaker situated at the bottom-left on the back.

Other amenities include WiFi, Bluetooth, GPS, and 4G LTE. Also included is NFC and even wireless charging capabilities, which a lot of mid-range devices don’t have. However, while the phone does come with a wireless charging battery cover in the box, it’s useless without the accompanying charging pad that has to be purchase separately. The Spectrum 2 comes with two NFC tags as well, which you can use to quickly change settings on your phone for different situations, and you edit the tags using LG’s built-in Tag+ app.

Overall, the Spectrum 2’s hardware is reminiscent of some top-of-the-line handsets that are currently dominating the Android device market. While it may not quite be up to snuff with LG’s current flagship handset, the Optimus G, the Spectrum 2 is certainly worthy of such an accolade, and it’s not everyday that you come across a mid-range budget device that’s deserving of top-tier status.

The Spectrum 2 runs Android 4.0 Ice Cream Sandwich with LG’s Optimus UI on top. It doesn’t detract from the traditional Android user interface, but there are a few pre-installed features and apps that add to the experience. There’s QuickMemo, which allows users to screen capture anything, like a webpage, photos, and even videos, and then write, draw, or jot down a memo directly on the screenshot using your finger (or stylus). There’s also LG’s NFC app Tag+, which lets you edit the settings associated with the two NFC tags that come with the phone — one designated as “Car Mode” and other as “Office Mode.” Obviously, you can make the two tags do whatever you want, but by default LG set up these two modes to get users started. The Tag+ app is extremely easy to use. I’ve never messed around with NFC before, so I wasn’t how difficult or easy it would be to set up NFC tags, but LG’s app makes it extremely easy thanks to the no-frills user interface. 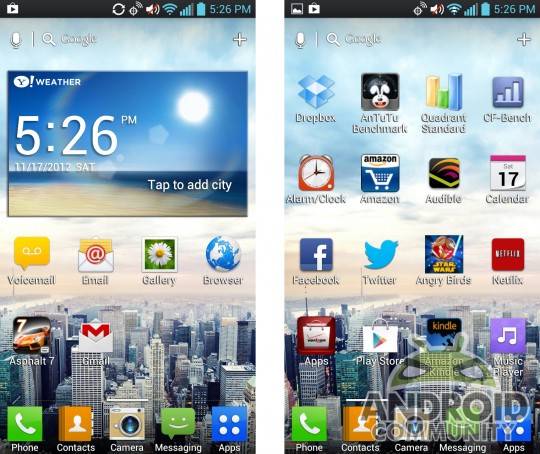 Other than that, it’s the typical Android interface that we’ve seen on other LG devices like the Optimus G and Optimus L9. There’s a highly-customizable home launcher, and tons of different animation effects. While it could definitely benefit from an Android 4.1 Jelly Bean update, the Spectrum 2 uses Ice Cream Sandwich to its fullest potential.

The Spectrum 2’s main camera has an 8MP sensor that’s capable of shooting full 1080p HD video. Photo quality is certainly respectable, and possibly just above average for a smartphone camera, although it’s certainly not the best we’ve seen. It takes great outdoor shots, and indoor photos are fairly good as well, as long as there’s ample lighting. While many cameras struggle during low-light situations by introducing a ton of noise, the Spectrum 2’s camera seemed to be guilty of that and then some — color balance would mess up big time with most photos taken in low light. I don’t mind a little bit of noise, but an off-balance of colors can turn a not-too-bad photo into a really bad one. 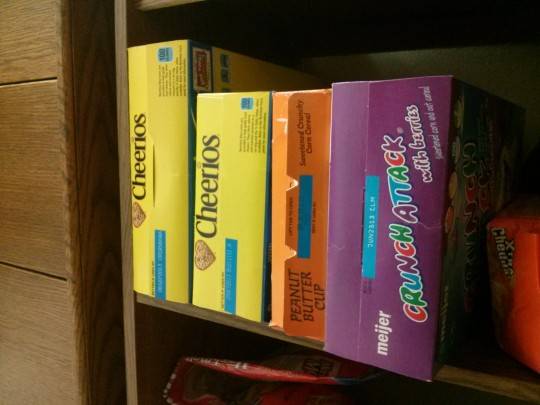 As with LG’s other devices, there’s quite a few settings and presets that users can change around on the Spectrum 2. You can adjust things like the exposure, ISO, and white balance, as well activate the voice shutter, where you can say “cheese!”, and the camera will take a photo without pressing any buttons whatsoever. However, I would have to say my biggest beef with the camera software is that there’s absolutely zero shutter animation, so it’s really hard to tell if the picture was snapped or not because nothing happens on the screen. The only way to tell is to look in the corner at a small icon that shows the most recent photo that you took. It’s not a huge negative, but it’s a small aspect takes away from the usability of the camera.

Video quality is pretty decent, especially outdoors with plenty of light. Obviously, you’ll definitely experience a lot of noise if you shoot inside a relatively dark room, but that’s to be expected. The videos have decent contrast and saturation, but it’s nothing too spectacular. It takes average video that definitely works in a pinch if you don’t have your main camera around, but I have to say that the video could easily replace the video capabilities on most point-and-shoot cameras.

The Spectrum 2’s battery packs in 2150mAh of juice, which is definitely respectable. On moderate usage with a couple of heavy-usage sessions here and there, I was able to go over 24 hours from a full charge until it reached about 15%. The Spectrum 2 also fares well on standby mode, even with things like WiFi and data turned on — the battery only dropped a few percentage points overnight. While the battery will definitely take a hit during a two-hour-long gaming session, moderate usage (checking email, browsing, etc.) will easily get you a full day before having to plug it into the wall, and maybe even two days if you stretch it. The screen seems to be the biggest battery drainer, so if you really want to extend your battery life, lowering the brightness by a few notches will do wonders. 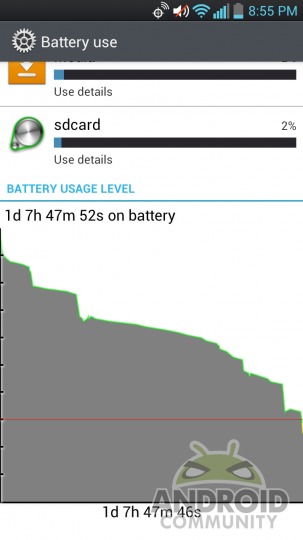 The Spectrum 2’s Snapdragon S4 chipset definitely performs, and we’ve witnessed that in several top-tier handsets in the past. In AnTuTu, the Spectrum scored just over 7,100, which edges out the Galaxy Note and the Galaxy Nexus, and it scored a 5,200 in Quadrant, beating out the HTC One X and nearly doubling the performance of the Galaxy Nexus. Swiping through screens was flawless and I hardly noticed any lag whatsoever. It’s extremely snappy and quick when navigating your way around the menus and the different screens. I did notice a little bit of stuttering in Chrome, but it honestly wasn’t much of a hindrance on the user experience, and only the paranoid will really notice it. 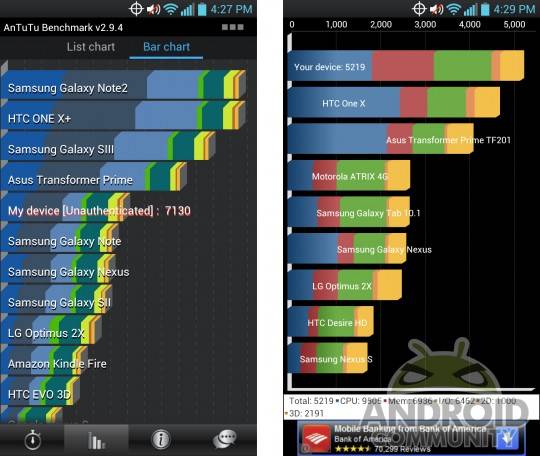 Honestly, the Spectrum 2 can handle anything you throw at it, and the Snapdragon S4 chip has proven to be one of the best smartphone chips on the market. While it certainly isn’t the quad-core S4 Pro chip, the 1.5GHz dual-core in the Spectrum 2 is nothing to laugh at at all. And the same goes for the handset’s 4G LTE capabilities. Verizon’s LTE network is crazy fast, and the Spectrum 2 is a great vehicle to take along for the ride. I ended up topping out at 25Mbps download speeds and 15Mbps upload speeds — this is faster than my base-level FiOS internet at home. Of course, we’ve certainly seen faster speeds in bigger cities, but getting that kind of speed here in Fort Wayne, Indiana is something that should make anyone smile. 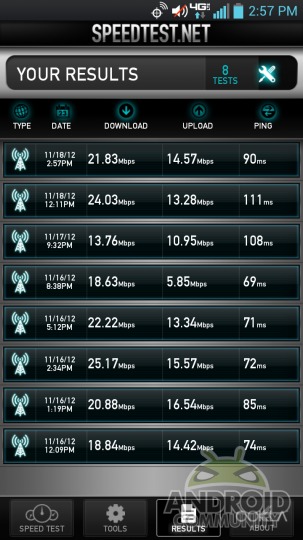 At any normal time throughout the year, I would say that the $100 subsidized price tag of the LG Spectrum 2 is worth every penny, but considering how you can get a Samsung Galaxy S III for next to nothing during the holiday season, I’d be lying if I said that you should pay $100 and go for the Spectrum 2. All of the holiday sales definitely puts LG’s new mid-range device in a tough spot, but considering how you can grab comparable phones for much cheaper is a no-brainer. 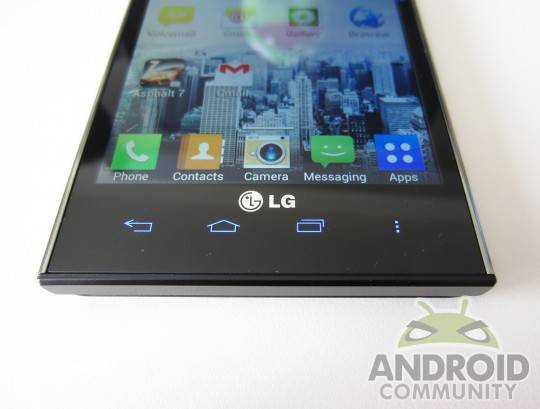 That’s not to say that the Spectrum 2 isn’t a good device — it is! It performs like a beast and has a great-looking 4.7-inch display. And while there are a few minor flaws that may or not bother some people, the $100 everyday price tag is a bargain for this device — just not during the holidays.