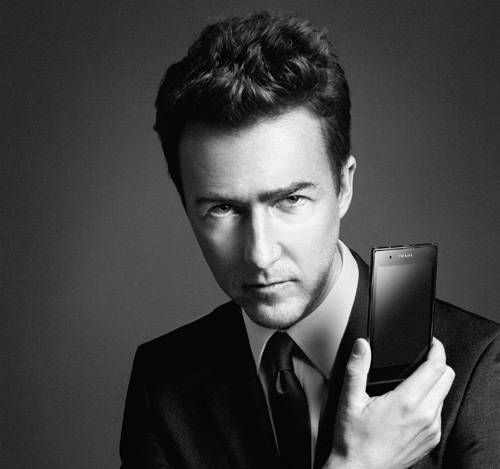 Surely a smartphone being marketed by PRADA wants to look good. LG and PRADA have teamed up for a third time with their new smartphone the PRADA by LG 3.0 and it is available now in the UK. What better way to show off their fashionable and sexy phone then with a few excellent models and actors. They’ve done just that and have employed the looks of two well known stars for their new campaign.

LG has launched their new PRADA campaign with Edward Norton (Fight Club, American History X, Primal Fear, The Score, The Hulk) and popular UK model Daria Werbowy to be the face of the fashionably smart PRADA 3.0 smartphone. We received some hands-on with the new PRADA last year and more details on that can be seen below. While Norton is mainly a US actor we most likely wont be seeing the PRADA by LG 3.0 in the states anytime soon, but we can hope right?

The PRADA 3.0 combines PRADA’s elegant and fashionable style with LG’s innovation making the best of both worlds — or they’d like to think so. The device comes equipped with a 4.3″ NOVA display and boasts a 1.0 GHz dual-core processor and Android 2.3 Gingerbread. It has been heavily skinned and isn’t too familiar but still looks quite nice. The faces of these stars may or may not help this device sell well but either way we’d love to check it out again if they decide to bring it to the US.