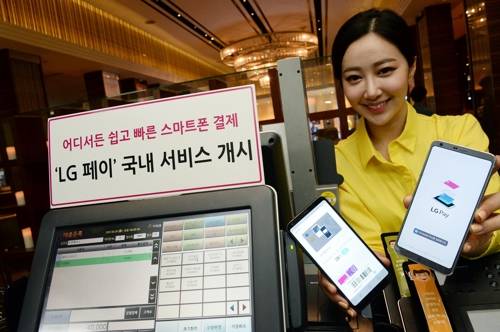 Samsung Pay, Android Pay (soon to be Google Pay), and Apple Pay have been around for some time now in the US and various regions, but another mobile payment system will soon be joining it. LG Pay will be launched in the US soon after enjoying moderate success in its native South Korea. The service will be launched in the first half of the year, together with their upcoming premium smartphones, the LG G7 and the LG V40 that will be unveiled next month at the Mobile World Congress.

LG Pay may also be renamed as LG Wallet when it will be launched in the US, although that isn’t a final decision yet. It works like most of the other mobile payment systems. You can leave your cards at home and just use your smartphone to pay for things, provided the establishment has one of those credit card devices. It uses the Wireless Magnetic Communication technology, which is slightly different from Samsung Pay’s Magnetic Secure Transmission technology.

Currently, LG Pay only works on premium devices but this year they will be expanding to the K10 smartphone and their other mid-range devices. When it launches in the US, it will only be available with the LG G7 and the V40 premium smartphones. But by next year, it will also expand to their mid-range phones. The LG G7 will be announced at the Mobile World Congress in Barcelona by late February and then will be available for sale by April, so maybe that’s when we can expect LG Pay as well.

Mobile payment systems still have not become as massive as tech companies were expecting due also to its rather slow expansion. But let’s see if this is the year when more users will actually adapt to it.