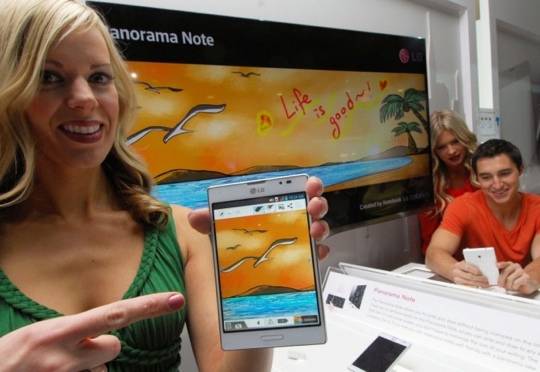 LG has been fairly quiet in terms of Android related announcements here at CES 2013, however they did offer one goodie for the Optimus Vu: II — a new app. The app is called Panorama Note and will allow users to create extra wide 3:1 ratio memos and drawings.

LG has said that the Panorama Note app was designed with the idea of being able to scribble freely on a large canvas. Think of it as writing on a large piece of paper, but focusing on just one small piece at a time. The app will allow users to write and draw, but perhaps more interesting, the app will also allow users to zoom in and out.

In fact, the Panorama Note app has 5.8 times zooming which will allow for easy navigation both horizontally and vertically. And for those worried about getting lost in the image or note — rest assured in knowing that the app will also have a Mini Map which shows the current location of the viewed image in the original image.

Aside from the Panorama Note app coming to the Optimus Vu: II, LG has also said that it will be available on “specific target devices” in 2013. Finally, in addition to the introduction of this app, LG was also using CES 2013 to show off other goodies such as QSlide, Live Zooming and Dual Screen Dual Play.