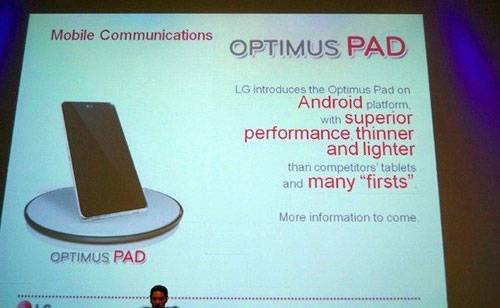 There were lots of us all excited about the prospects of tablets running Android coming from well known electronics giants like LG .We were then bummed when we heard that LG was not going to put tablets on the market using Froyo and other exiting versions of Android after stating that the OS wasn’t tablet appropriate.

LG has planned to toss tablets on to the market when a better version of the OS lands that is suited to the tablet market. Apparently, that well suited version will be Honeycomb with an LG rep stating that the tablet running the new version of the OS are set for early 2011. The rep also gave up a few tidbits on the tablets and what will be inside the machines to whet the geek appetite.

According to the source, the tablet will have dual-core Tegra 2 inside and will sport an 8.9-inch screen. The tablet will land in the US and Europe at the same time. Now that you know these tablets are coming, will you wait or just grab another tablet that is here in time for Christmas?