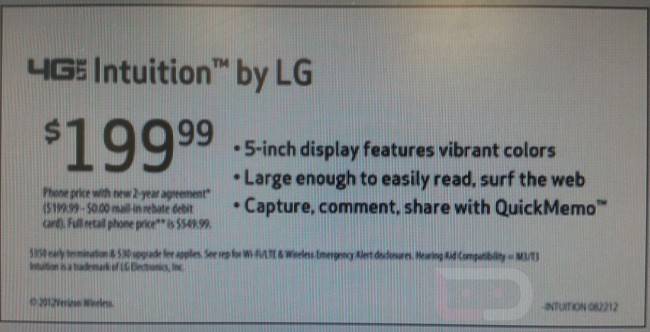 Most of LG’s devices on Verizon have been listed this way with “by LG” following the name so this all makes perfect sense. Today the folks at Droid-Life received the details above and can confirm the LG Intuition will be announced shortly by Verizon, and then hit the shelves at $199. 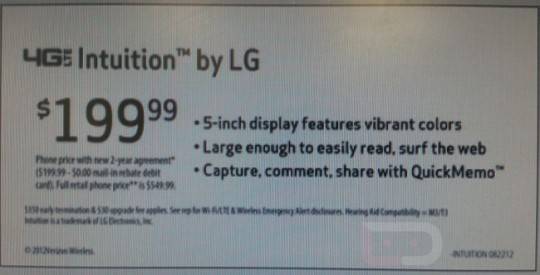 We’ve seen multiple documents stating it would arrive this quarter, directly from LG. Pictures have shown the 5-inch smartphone in whole sporting the Verizon 4G LTE logo, and now we have this. The evidence are piling up and all we need now is Verizon and LG to make an official statement.

With the Galaxy Note 2 being announced in just about a week we are all wondering what LG and Verizon are waiting for, but either way we’ll know the details soon. The Galaxy Note is available on AT&T and T-Mobile and this will be the first “phablet” device for Verizon. Hopefully the Galaxy Note 2 arrives for Verizon too so we can all forget about this Optimus Vu… I mean Intuition. HTC has their own phablet in the works too so this will be an interesting few months for large smartphones headed to Verizon.