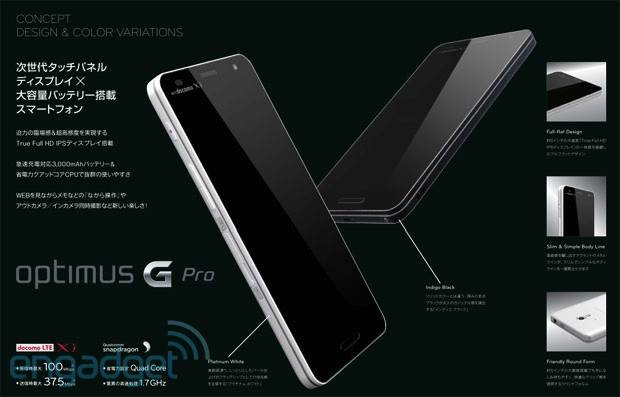 Details on what’s shaping up to be LG’s new flagship Android smartphone, the LG Optimus G Pro, have leaked, hinting at an imminent release in Japan. Running a 1.7GHz Snapdragon S4 Pro APQ7064 processor with 2GB of memory, according to Blog of Mobile, and clad in a choice of silver or black slimline casing, going by the slide sent to Engadget, the Optimus G Pro is expected to pack a 13-megapixel camera.

Up front is a 5-inch display running at 1920 x 1080 resolution, topped by a 2.4-megapixel front-facing camera for video calls. Inside is expected to be 32GB of storage and a 3,000 mAh battery; useful, since the G Pro should use 4G LTE networks as well as – for the Japanese market, at least – include 1-Seg and NOTTV TV functionality.

If you think it sounds a lot like Sony’s Xperia Z, revealed at CES last week, then you’re not alone; this polishes up the Optimus G to remain competitive against the fresh breed of devices we’re seeing emerge in 2013. An international launch is more than likely, though there’s no telling when it might happen.