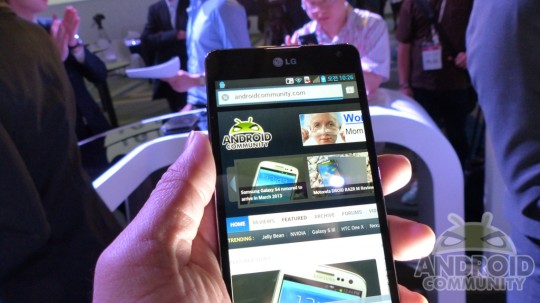 AT&T customers waiting on the LG Optimus G were given some good news today, as the carrier announced that the phone will be available at its stores on November 2. The phone will set you back $199.99 with a two year contract, and if you want to make sure you get it on day one, you can pre-order it beginning tomorrow. The LG Optimus G has the distinction of being the carrier’s first quad-core 4G LTE phone, so we’re expecting it to be pretty popular with AT&T customers.

Of course, 4G LTE capabilities are only the tip of the iceberg when it comes to the LG Optimus G’s list of features. Specifically, the Optimus G comes equipped with a quad-core Snapdragon S4 Pro processor clocked at a speedy 1.5GHz, and with the 2GB of RAM this beast is packing, you’ve got one powerful device on your hands. You’ve also got 32GB of internal storage at your disposal, but the Optimus G comes with a microSD slot too, so you should rarely want for more storage space if you pick up this phone.

Sadly, it won’t come running Jelly Bean out of the box, with LG opting for Ice Cream Sandwich instead. You can bet that the Optimus G will be high on LG’s list of phones that will eventually get an update to Jelly Bean though, so the fact that it’s running Ice Cream Sandwich initially isn’t such a bad thing. With the Optimus G, you’ll get a 4.7-inch IPS LCD display running at 1280×768 resolution, and to top things off, there’s an 8MP rear-facing camera to shoot pictures and video with.

So, the LG Optimus G sounds like a good candidate if you’re in the market for a new phone. It’s worth pointing out that the $199 price tag only applies if you sign a two-year contract, sign up for either a Mobile Share Plan or Voice Plan that costs more than $39 per month, and a DataPlus or DataPro plan, so keep that in mind. Just over two weeks to go before the LG Optimus G arrives at AT&T – are you picking one up?