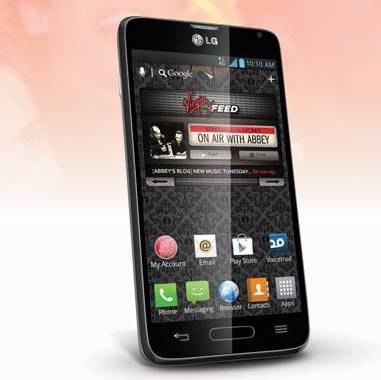 The LG Optimus F3 is sporting 4G LTE connectivity and running Android 4.1.2 Jelly Bean. Specs include a 4-inch IPS display that is protected by Gorilla Glass 2 along with a dual-core 1.2GHz processor, 2460 mAh battery, VGA quality front-facing camera and a 5 megapixel rear-facing camera with LED flash.

The handset can record 1080p HD video and also has WiFi, WiFi Direct, NFC and Bluetooth. Some of the software perks are also tied in with the hardware. For example, the handset ships with LG Tag+ support. These are small sticker tags that can be programmed to perform a variety to tasks. The Optimus F3 also has Android Beam which connects to the NFC and Bluetooth.

Other goodies one can expect with the Optimus F3 include a Quiet Mode, Live Effects for video recording and editing, SmartShare which allows for sharing with other DLNA capable devices and QSlide 2.0 for what LG refers to as “advanced” multitasking. QSlide 2.0 will let you run up to three apps by using resizable windows and overlays.

Touching back on the Beyond Talk plan and we find a plan that includes unlimited data and messaging for as little as $35 per month. Otherwise, LG has recently launched the Optimus F7 with US Cellular and we also saw the Optimus F5 (along with the F7) unveiled earlier in the year. The Samsung Galaxy Ring also arrived with Virgin Mobile back in mid-June. That handset is limited to 3G speeds and is priced at $179.