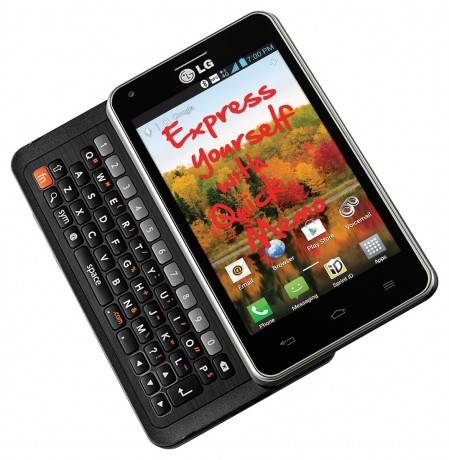 The folks from LG have announced another new 4G LTE powered smartphone today. Only this budget device rocks a 4-inch display and a full slide out QWERTY hardware keyboard. Since we know there’s still a few hardware keyboard fans around — we figured you’d like to hear more. Check out full details of the new LG Mach below.

The LG Mach isn’t coming to AT&T or Verizon, and instead the limited 4G LTE from the Now Network will be the speeds available here. So you can’t expect too much from that LTE until they get it rolling out to more cities across the US. Regarding specs the LG Mach is a decently well-rounded budget device too.

The Mach runs a 1.2 GHz dual-core Qualcomm S3 processor (last generation) most likely 1GB of RAM, has a 4.0-inch display of unknown resolution but probably qHD, Android 4.0 Ice Cream Sandwich is on board, and you’ll also get a 5 megapixel rear facing camera. Certainly not high end, but decent enough for an average priced smartphone.

LG is touting this as their thinnest QWERTY keyboard slider, coming in at just 0.48 inches thick. You’ll also be working with LG’s Quick Memo feature where you can save, edit, draw, and share whatever is on screen with a friend. Exact details on pricing and available have yet to be released from LG, but we expect they or the carrier will announce more details soon.