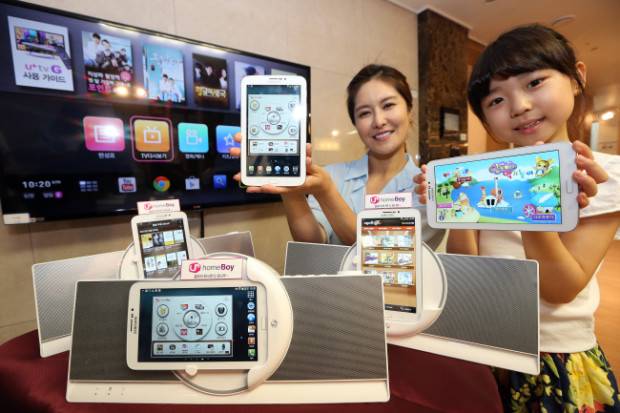 The folks from LG have apparently launched a brand new 7-inch Android tablet in Kore. Only it is made by Samsung and is a rebranded and re-purposed Galaxy Note 3 device. To make more sense out of that title you read above, this is a tablet launched by LG for their own network that’s in Korea.

LG-owned Korean carrier Uplus this week has announced a brand new tablet that will be able to take full advantage of the carriers network, aside from the usual tablet activities. So what device is that. The Homeboy, which is a 7-inch Samsung Galaxy Tab 3 from the sound of things.

We know they are rivals, in a way, so the news instantly was quite surprising here. Then again, LG has been out of the tablet game for quite a while, although reports have suggested their re-entry into Android tablets later this year.

The home part of the name is for all the activities it can do at home, aside from the usual web browsing. the homeboy will be a “smart-home device to replace conventional home appliances”, and will let Koreans “access some 50 TV channels, movies, millions of music tracks and tens of thousands of e-books.” So basically it does it all, sort of. The device can also connect to your smartphone and act as a CCTV, letting users of Uplus sign in and see what the homeboy camera is viewing. As a way to keep tabs on your home while away.

It’s pretty interesting to see LG partnering with Samsung on a tablet, but that most likely will change when they start making their own again.