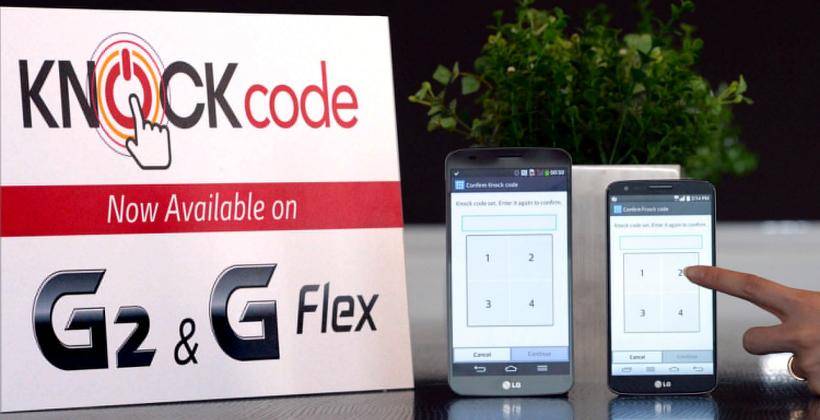 If you owned LG‘s 2013 flagship and was feeling a bit left out from the company’s latest fancy features, despair no more. LG has announced that its much advertised Knock Code feature will be descending on the LG G2 as well as the LG G Flex.

Knock Code, for those who might have only heard it for the first time, is the latest, and admittedly most interesting, iteration of the “tap to unlock” gesture. Going beyond the simple, and rather insecure, double-tap to unlock feature that debuted in the LG G2, the company has introduced a pinch of pattern matching to add a bit of security as well as personalization.

Instead of relying on just two simple taps, Knock Code lets users choose from two to up to eight possible combinations of taps on four quadrants. This yields 80,000 possible combinations to choose from. But unlike regular pattern-matching security features, users won’t have to worry about hitting the exact right hotspots, as Knock Code can approximate the pattern. Whether you do it large or in a very subtle sweep, Knock Code will work and unlock the device accordingly.

With the announcement of Knock Code’s upcoming arrival, the G2 and G Flex joins the growing roster of LG devices that will be receiving the feature. This includes not only the newly announced G Pro 2 and G2 mini, but also devices lower down the chain like the F and L series. The feature will be coming via a firmware update in April, though the exact date has not been revealed and will most likely vary according to market.