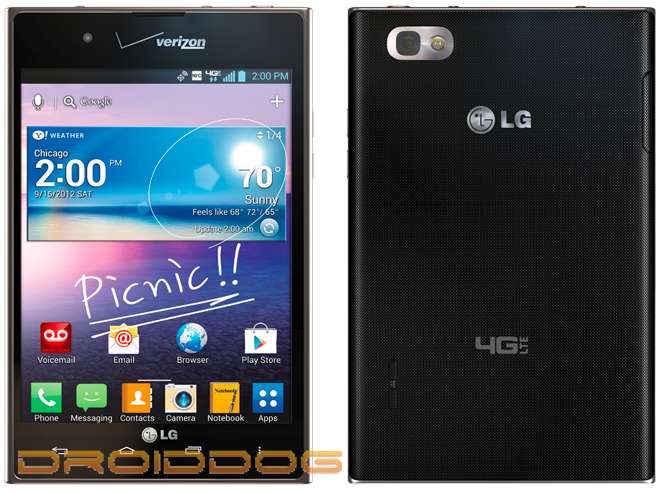 An upcoming smartphone for Verizon Wireless, the LG Intuition (formerly known as the Optimus Vu) is still a rather large phablet device, but now we have some official photos. LG released their Optimus Vu earlier this year internationally and we’ve seen countless leaks this month confirming a Verizon launch. Now today we are getting our first press shot.

Previously we heard the Optimus Vu would launch during quarter 3, then we saw some leaked photos confirming it was headed to Verizon. Then last wee we got our biggest set of details with an official screenshot confirming the device will be called the LG Intuition on Verizon with 4G LTE for only $199.

Basically it is still the same huge device only with Verizon branding all over it. You’ll still have the same 5-inch 4:3 aspect ratio display, Android 4.0 Ice Cream Sandwich, and of course that included stylus for pen input. We’ve had our hands on this phone more than once (linked below) and can confirm it’s huge, and feels awkward to hold.

This was birthed after seeing the success of Samsung’s Galaxy Note, and now they are set to release the Note 2 this week we have a feeling LG is a little late to the party. Since the Galaxy Note never made it to Verizon this will have to fill the void, unless of course the Note 2 launches for Big Red. As usual we get excited seeing a date on the press photos “date/weather” widget, and here we have September 15th. We could see this launch on Verizon come the 15th for $199. Who’s buying?