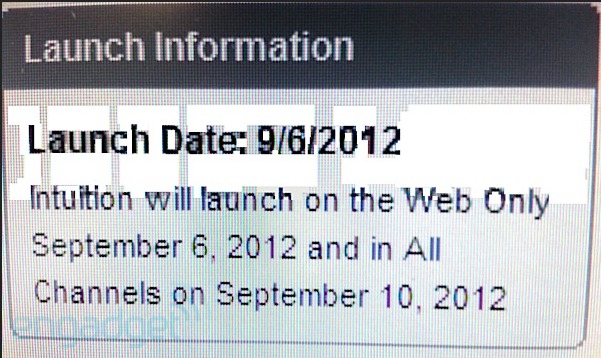 LG’s own take on the “phablet” known as the LG Optimus Vu has been re-branded and confirmed for Verizon Wireless. Now after countless rumors and leaks suggesting it would arrive for Verizon, this weekend the folks at Engadget received some rather compelling screenshots for a September 6th release date.

For those unaware, the Optimus Vu rocks that odd 5-inch 4:3 aspect ratio display, has an included stylus like the Galaxy Note, and runs on Android 4.0 Ice Cream Sandwich. The specs have been improved to a Qualcomm 1.5 GHz dual-core processor, 1GB of RAM, 16GB of internal storage and of course Verizon Wireless 4G LTE speeds. 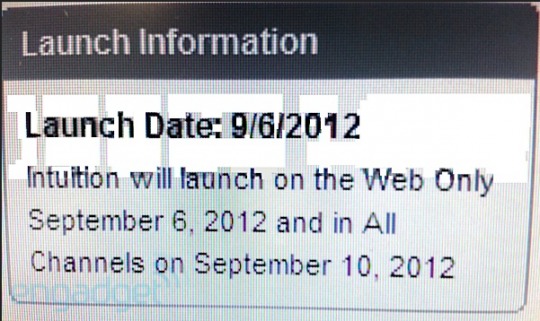 The image above is another gathered by the source, and confirms that the Intuition will be launching as a web-only special starting this Thursday, September 6th, then will hit all retail stores from Big Red starting on the 10th of the month. The 6th is also the silent rollout of the Samsung Galaxy Stellar 4G LTE if other recent leaks are correct. Previous rumors had the device coming on the 12th but now we aren’t so sure.

We haven’t heard much from Verizon or LG regarding this device but surely it is coming soon. With Verizon these leaks or details can always change on a moments notice so until we hear from the big guys themselves we won’t be holding our breath. Sadly this device comes to the US rather late after being available internationally for a few months already. Samsung just announced their Galaxy Note II that clearly dominates the Intuition in all areas. Hopefully that will also be coming to Verizon but we’ll have to wait and see.

If this LG phablet is something you’re interested in you’ll want to stay tuned for further details.