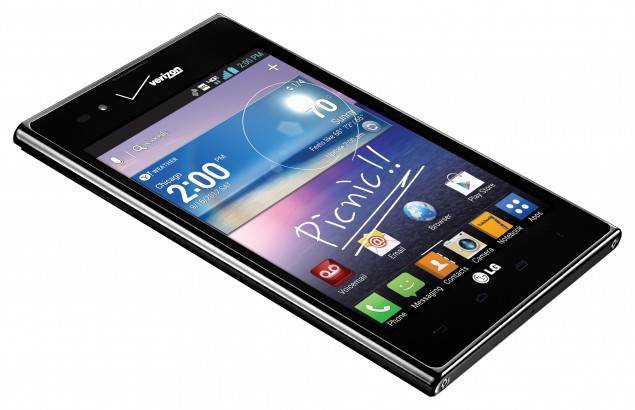 Verizon has finally and officially announced the often rumored LG Optimus Vu with 4G LTE. As you should already know this massive phablet is called the LG Intuition from Verizon and as of today it will be available starting September 6th. We saw these details last week but today Verizon has confirmed all the important bits.

The Verizon Intuition by LG will be available online starting September 6th for $200 after the usual 2-year contract signage, and then will be available nationwide in Verizon Wireless stores starting on the 10th. You won’t be able to walk in and get one quite yet, but the wait shouldn’t be long.

This device is a bit dated before it even hits the streets. Verizon doesn’t offer the Galaxy Note so this is their only plus size BBS (big beautiful smartphone) at the moment — unless they get the Galaxy Note II. Many are hoping that device comes but if not the Intuition will have to take care of your phablet needs for the time being.

This oddly sized and shaped 5-inch 4:3 aspect ratio phone still is powered by a 1.5 GHz dual-core processor, 1GB of RAM, and an 8 megapixel camera so should make plenty of customers happy. It just isn’t quite up to spec compared to the Note II or popular Galaxy S III. Rumors also suggests HTC has a 5-inch 1080p smartphone headed to Verizon but for now the LG Intuition is your best bet. If you are on the fence check out a few of our hands-on below, then head to a store near you on the 10th and check it out yourself.