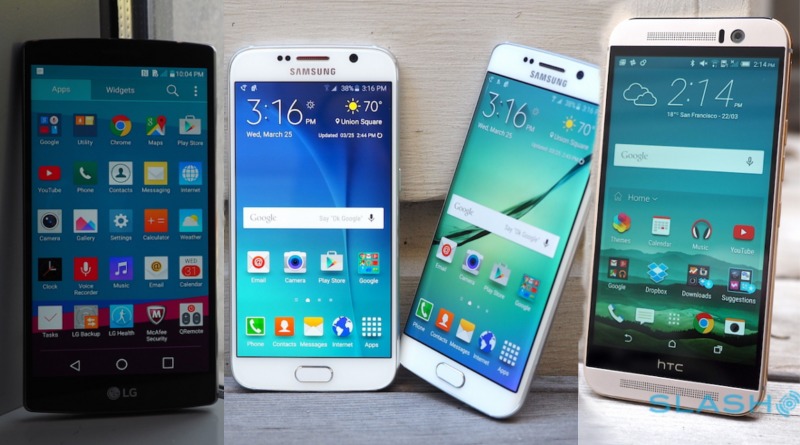 Now that LG has finally unveiled the G4, all gloves are off in the 2015 flagship showdown. Unless, of course, you’re still waiting for the non-Xperia Z4 coming from Sony later this year. But for now, it’s time for the big three to face off in the mobile world. In one corner, we have the still premium-looking HTC One M9. In another corner sits the plastic-less Samsung Galaxy S6. And finally, the newcomer, the leather-backed LG G4. Which one will you root for and which one will you buy? As it turns out, it’s a close call.

To kick things off, let’s have a handy chart that puts the core specs of the smartphones side by side. This is just a condensed overview of what the devices are packing inside, which also determines how smooth a smartphone would run, as well as the juicy features it might hold.

As one can see, the differences aren’t exactly clear cut. In all except one feature, the three are almost evenly matched. Almost. The HTC One M9 lags terribly behind in the display department, sporting only a Full HD screen. It’s f/2.2 camera aperture is said to be no match for the other two’s larger sizes, despite having more megapixels in its sensor. And the Qualcomm Snapdragon 810 continues to be mired in controversy over heat issues.

The match is even closer when you pit the two Korean rivals against each other, though LG seems to win by a very narrow margin. Let’s have a rundown of some of the points.

• Samsung Exynos 7420 is believed to run circles around the Qualcomm Snapdragon 810 without generating too much heat, but LG claims that the hexa-core Qualcomm Snapdragon 808 is just as good but even more efficient.
• The Galaxy S6’s compact display size means it has a higher pixel density but it could also mean more squinting. LG’s 5.5 inches, then, is advertised to offer a better balance in screen real estate. Plus, Quantum Display.
• Samsung uses a faster DDR4 RAM and so does the HTC One M9 (according to some sources), the LG G4 still uses a slightly slower DDR3.
• The f/1.8 opening is touted by pro photographers to make a world of difference, when all things are considered equal, like the 16 megapixels. Of course, LG promises a better auto mode experience thanks to its Color Spectrum Sensor. Real world testing required. The 8 megapixels for selfies is definitely a winner. For those who love selfies (and video chats), that is.
• The 3,000 mAh battery definitely trumps the other two. Sadly, it mysteriously lacks Qualcomm’s Quick Charge technology, so the other two would win in a fast charging race.
• LG provides two things that Samsung ditched when it went metal: a microSD card slot and a removable battery. Double win.

There are also factors to consider in making the decision, like the design of the device and the materials used. The Galaxy S6 is undoubtedly novel as far as Samsung’s devices go while the LG G4 sticks true to its core design. Luckily, there also options for those who don’t like leather, but it’s still plastic all around.

For now, it seems that the LG G4 is ready to come out on top. Of course, these are still on paper and will need some heavy testing to be proven, so be on the lookout for our in-depth review of this potential champ.