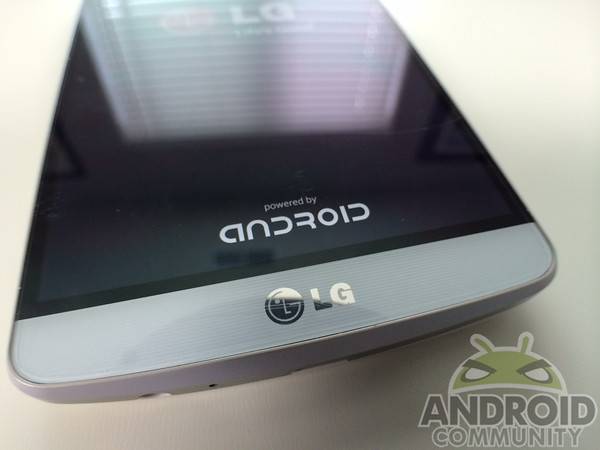 Latest in their lineup of flagship Android handsets, the LG G3 is one beast of a handset. Packing a big screen into a surprisingly small frame, there are two attractions that everyone keeps chatting about: that screen and the battery life. After toying with the G3 for a few weeks, we’ve drawn our conclusions. Is this the Android phone to beat?

We will note, straight away, that we are not testing the US build of the G3. That final US model will be largely (if at all) unchanged, save for the extendable antennae present on our South Korean model.

The G3 makes some interesting compromises. To get thin bezels, they placed the power key and volume rocker on the back. The plastic build of the phone feels anything but cheap, and it’s lightness is a stark contrast to the profile and appearance. We often equate heft to quality, and the LG G3 is both light and premium.

Having the power and volume on the back leaves the sides, top, and bottom relatively blank. There is a Micro USB port on the bottom, along with a headphone jack. A small microphone on the top and bottom of the phone are also there, but other than that — you get a thin, metallic strip breaking up the mostly white body.

The screen is — and there’s no other way to put it — striking. It’s surprisingly big for the device, taking up a bulk of the front. Small bezels sit on the top and bottom, and the bottom screen portion has a white area that compliments the color scheme on our phone. I thought I’d hate that. As it turns out, I love it.

I’m that annoying Android purist who would rather have a Nexus than even blink at another device’s Android skin. “Motorola is the only one who got it right”, in my mind. I came very close to loathing the G Flex OS that LG slammed in there. I should, in theory, have a similar distaste here.

The problem is, I don’t. While I don’t like heavy Android skins — and LG still has a fairly hefty one — it works really well. It’s heavily customizable (you can even adjust the keyboard height), and navigation is easier this time around. LG has simplified the UI a bit, leaving less of a learning curve.

Multi windows is a neat feature, but I’m not sold. Seeing an app in half the screen it’s meant for is often less than pleasant. I wish LG had (or would, maybe) coerce Developers into designing apps made for the feature. In theory it’s awesome, in practice it’s just ugly.

The UI tweak went all the way to the base level, where round icons and a new color scheme brighten things up. The refreshed settings tray is endlessly simple to use, and makes sense for something that isn’t pure Android — finally. LG has lost the clutter, and for that I’m grateful. The revamped keyboard is also nice, letting you adjust the height as mentioned, and also use swipe-to-type.

We’ve been over battery life pretty in-depth before, so we won’t keep harping on you about it. The bottom line is that it’s phenomenal. LG both throttles and over-clocks various features like the screen and CPU as needed. The G3 sips power when needed, but still keeps up. I routinely went days without charging, with normal use (messaging a lot, emails, a bit of web surfing, etc.). With such a massive, pixel-dense screen, LG could have been excused for having terrible battery life here — they don’t, though. The opposite is true, really.

LG went for the jugular with the G3 screen, and other OEMs should take notice. Not only does the screen blow you completely away, LG’s battery prowess reduces strain on the driver so it’s not draining your battery all the time. A giant, vibrant, gorgeous screen that doesn’t affect battery life abnormally. Pure “wow”.

So much fervor over cameras in smartphones these days; would the G3 continue to blow us away? In normal, day-to-day photography, the G3 is just fine. The pics snapped were color accurate and clear. There have been some who lament the low-light performance, but we had no issue there. Aside form being a touch noisier, the G3 performed adequately in low light. The G3 has a nice front-facing cam, too, and uses whitespace on the screen to provide lighting — a very useful trick if you’re into selfies.

We can’t say the G3 is better than some others, though — notably the Galaxy S5. That phone has a fantastic camera, and the G3 comes close to besting it, but just doesn’t quite get the job done. It seems to have more to do with light sensitivity than anything else. The quick shutter also has some issues, currently. The two shots of the Androids below were both taken in the same lighting and environment. The first was when the G3 was given time to focus, and the second one of a series of pics snapped off quickly. We’ll look forward to testing the US model when it becomes available, hoping that some small tweaks are made to the G3 camera.

I told you we were ready to draw conclusions about the G3, so here it goes: The LG G3 is what an Android phone should be. Period.

Of all the flagship devices we’ve checked out over the years, this one is the first to actually leave us wanting for nothing. Smartly designed with an elegant software layer, the G3 is as close to perfect as any Android handset is. While we’d naturally make changes — as we would with any phone — the G3 wins on many more levels than those which we’re left considering changes we’d like to make.

The sound produced was nice, but a 1-watt speaker is a head scratcher. The build is nice, but it’s still plastic. The screen takes up almost all of the face, but it’s likely a touch too large for smaller hands to handle with ease.

Where LG really got me — and this is a significant point for any Android phone — was stripping down their Android skin. The LG G3 lets Android shine where it does, and improves in spaces LG deems necessary. Whether or not I agree with their changes is a different matter altogether. What I appreciate is that they had the respect for Android to realize they were suffocating it.

The real takeaway for me is that unlike some other top-tier OEMs (yes, I mean Samsung, get over it), LG had the bravery to scale their Android overlay back a touch. Simplifying their UI and navigation are significant moves that immediately yield big results. The LG G3 and the HTC One (M8) are the first devices a new Android user and seasoned fanboy would find favor with.

Is this one you should be waiting for, though? Absolutely. If you can afford a full-priced phone (disclaimer: we don’t know what the G3 will cost when it hits the US, but there’s no reason to think it will fall under the $650 average for smartphones), wait and give the G3 a strong look. If you can get past the