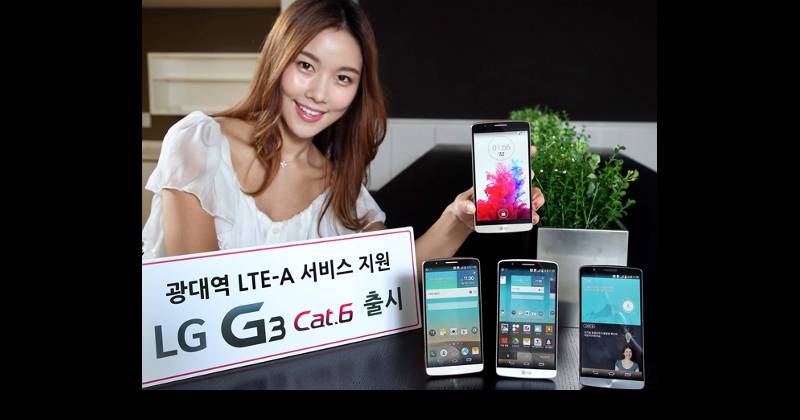 LG seems to now also be doing the LTE-A variant dance like its arch rival. Instead of vesting its latest flagship with the latest and greatest specs, including an LTE Category 6 compatible modem, LG has left the G3 a bit wanting in that area and instead will be launching a different model in its home country just for this very purpose.

So what does the LG G3 Cat. 6 variant offer that its flagship namesake can’t. Well, as the name implies, it has support for Category 6 LTE. That means, at least in theory, that users will be able to achieve download speeds up to 225 Mbps, depending of course on the network quality. Considering that Korea likes to flaunt its LTE-A networks, that might not be impossible to achieve. In practical terms, LG says that users will be able to download an 80 MB music video in just 2.8 seconds and a 1 GB movie in 36.4 seconds. Again, in theory.

There is, however, one more difference. In order to support this high-bandwidth LTE network, LG had to swap out the Qualcomm Snapdragon 801 on the original LG G3 with a more recent and more multimedia-focused Snapdragon 805. But aside from Cat 6 support, the new processor also bumps up the processor speed, up to 2.7 GHz max for each of the four cores. In contrast, the Snapdragon 801 only reaches 2.5 GHz. The GPU is also an upgraded Adreno 420, bringing with it maximum graphics performance.

In all other aspects, the LG G3 Cat. 6 remains the same LG G3 that you might have fallen in love with, which is good for LG’s core Korean market. Those who have already invested in the main flagship won’t have to feel jealous over this new variant, unlike the Samsung Galaxy S5 LTE-A, which is a substantially different and better model than the Galaxy S5. No price has been mentioned yet but so far it will only be available in Korea, starting July 25. It will come in Metallic Black, Silk White, and Shine Gold colors.