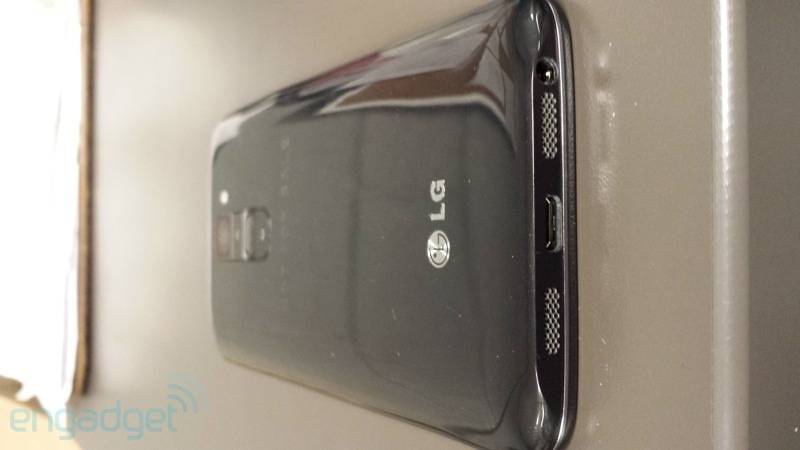 The rumors surrounding LG‘s upcoming G2 flagship smartphone have been coming in at a steady pace. Most of the leaked photos have been blurry and cut off, but now we’re getting the best look yet. Today an entire gallery of images showing nearly all the hardware has leaked, and confirms the back will feature touch-controls instead of a volume rocker on the side. Take a look at this ultra thin device below.

This is out best look yet, as all previous leaks were simply blurrycam photos of the front. Thanks to Engadget we have the full picture here. The device looks like a fine blend between the LG Optimus G, the Nexus 4, and an iPhone. Well that’s what we think at least. Complete with speaker grills on bottom, a 13 megapixel camera, and a pretty sleek overall package.

According to the tipster, the screen is in fact 5.2-inches instead of 5.5 and we’ll be working with a 1920 x 1080p full HD display. The nearly edge-to-edge display means this won’t take up too much space in your hand, and could come in similarly sized or smaller than the Galaxy S4. Then of course we have the Qualcomm Snapdragon 800 quad-core at 2.3 Ghz, reportedly 2GB of RAM, and Android 4.2.2 Jelly Bean on board. 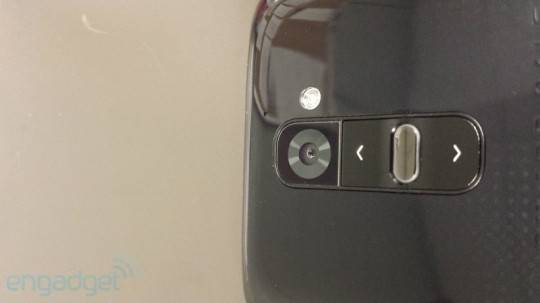 There is no carrier branding present, but just like the Optimus G were expecting at least AT&T and the Now Network, and possibly others to follow. The bezel sure looks pretty thin here, and the bottom speakers are a nice edition, but gives it that iPhone look. It looks like the rear buttons will do more than just volume up/down, as we see a button. What do you guys think of this idea, and what else could that button be?

[Update] 4Leakz has posted a short LG Optimus G2 hands on video on Youtube, the G2 size is about 5.46-inch height x 2.80-inch width. The device in the video has a model number LG-D803, the NFC icon on top also confirm that NFC sensor will be built in as well. Watch the video below!

As a reminder, the device will fully be unveiled August 7th in NYC, and we’ll be there live for all the details and hands-on coverage. Check it out below.