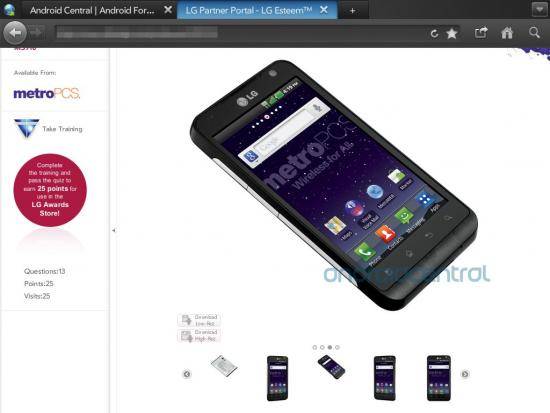 Found on a LG Partner portal, the LG Esteem has been confirmed for MetroPCS. The device will run on MetroPCS’ 3G/LTE network. It will also be running Android 2.3 Gingerbread on board as well. Though MetroPCS doesn’t sell its devices on discount with contracts, it is also reported that the device will sell for $349 with a $100 mail-in-rebate.

Apart from the inclusion of LTE, the device’s specs are a little low key compared to the other Android powerhouses on the market, but seem sizable to MetroPCS’ existing lineup. The LG Esteem features a 1Ghz Snapdragon processor, with 512MB of RAM and 8GB of on-board storage. The LCD display is 4.3 inches with a 720p enabled, 5 megapixel camera on the back. The device also features a front facing 1.3 megapixel camera for video chat as well.

MetroPCS had also recently announced that they would be developing 3G service over their existing EV-DO network. The company made bold moves by initially skipping over developing a 3G network in support of quickly building its LTE network. For reasons that they haven’t specified quite yet, MetroPCS had recently announced that they would be upgrading approximately 30% of its EV-DO towers for Rev. A support.