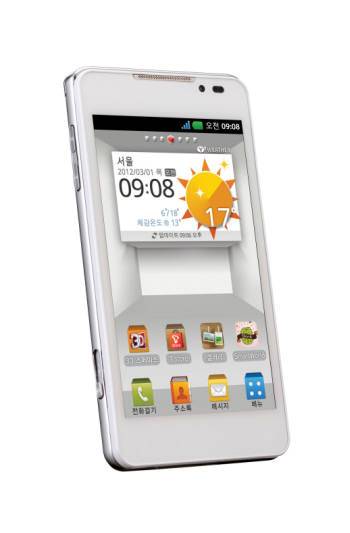 Remember that stretch of a few weeks in 2011 when everyone was thrilled about lenticular 3D displays? LG does, and would like you to think that it’s still every bit as exciting. That’s the inescapable conclusion behind the LG CX2, AKA the Optimus 3D 2, newly leaked by ETnews.  The phone is likely strutting its three-dimensional stuff prior to an official debut at Mobile World Congress. According to the leak, the new screen greatly improves both the 3D effect and legibility, thanks to an IPS-based screen.

Details include a .39-inch (9.9mm) profile, considerably thicker than previous rumors which indicated a 7mm device. Those rumors also pointed towards a dual-core processor and a bigger screen, though neither of those bullet points are touched upon today. A bigger screen would seem to be in order, but the render above doesn’t look significantly larger or smaller than the original phone. Based on the icons in the screenshot, it’s running LG’s version of Gingerbread – sorry, Ice Cream Sandwich fans.

Expect to see the CX2 and/or Optimus 3D 2 later this month when LG unveils its “revolutionary” new phones at Mobile World Congress. Assuming that’s the case, anywhere from a month to three months later the phone should start appearing on different carriers. Given how LG phones tend to be re-branded in the United States, there’s no telling what name it might be flying under in America.