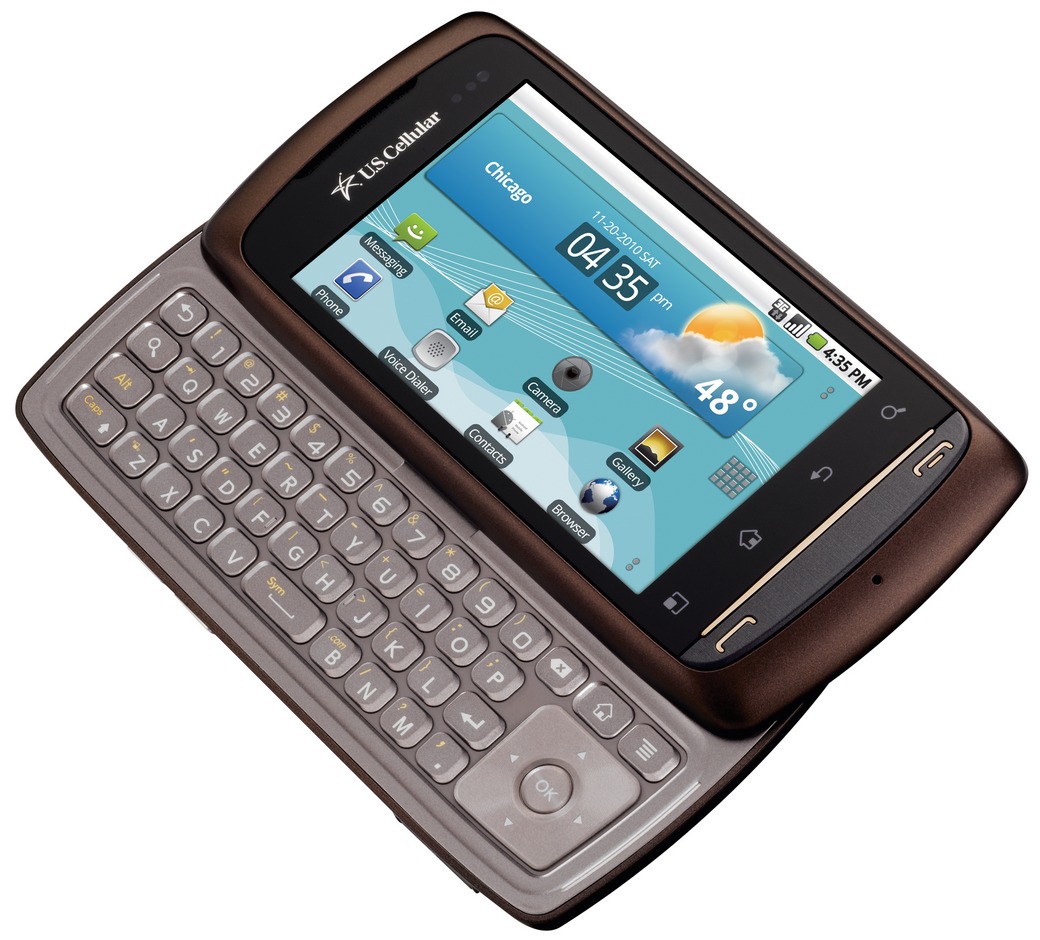 US Cellular tells us today that they plan on releasing the LG Apex on November 19 for $79.99 after $80 mail-in rebate tied to a two-year contract. The LG apex is a lovely 3.2″ touchscreen machine with vibration feedback, slide-out QWERTY keyboard, and it runs on Android 2.1. Also in the announcement is a note about the LG Optimus U which will be debuting in December, that being the last of US Cellular’s Android devices for the year.

The LG Apex features a durable tempered glass touchscreen, luminous sensors that adjust brightness depending on the light surrounding the phone, live wallpaper, five home screens, and of course, a lovely slide-out QWERTY keyboard. Then there’s a 3Megapixel autofocus flash camera and camcorder that features panorama mode (6 pictures combined into one), Wifi, MP3 player capable of playing while doing other tasks on the phone, and a video player that plays WMV, MP4, 3GP and 3G2 formats. Read the whole press release below:

CHICAGO (Nov. 17, 2010) – Riding a wave of industry recognition for wireless innovations like “no contract after the first” with faster phone upgrades and Overage Cap, U.S. Cellular continues to bolster its expanding smartphone portfolio with the LG Apex, the carrier’s latest high-performance, Android-powered device. The phone will be available in U.S. Cellular stores and at uscellular.com starting Nov. 19 for $79.99 after an $80 mail-in rebate. The LG Apex, with its vibrant 3.2” touchscreen and sleek, slide-out QWERTY keyboard, joins a string of cutting-edge products recently launched by the carrier, including the HTC Desire, Samsung Acclaim, Samsung Mesmerize (a Galaxy S smartphone) and the upcoming Samsung Galaxy Tab, slated to arrive in stores this month. The LG Optimus U will debut in December rounding out U.S. Cellular’s Android-powered offerings for 2010.

“Phones powered by Android are perfect for customers looking for high-performance devices that help them stay productive, entertained and connected on the go,” said Edward Perez, vice president of marketing and sales operations for U.S. Cellular. “The LG Apex is backed by the tremendous value of The Belief Project and our high-speed nationwide network, making it a great gift this holiday season.”

U.S. Cellular’s growing catalog of Android-powered, BlackBerry and Windows Mobile phones is a key part of its strategy to deliver cool devices while elevating the customer experience through industry-leading initiatives. Launched in October, The Belief Project is an array of innovative initiatives like “no contract after the first” with upgrades to the newest phones at promotional prices every 18 months. Customers automatically get valuable rewards just for being a customer that can be used for even faster phone upgrades in as little as 10 months depending on their Belief Plan. Rewards can also be used to get additional lines, phones, accessories, and ringtones.

U.S. Cellular’s new bundled National Single Line and Family Belief Plans offer affordable voice, text and data packages. Customers who text, e-mail and download more than they talk may prefer the new Primary Plus Plan for $69.99 per month that comes with 5GB of data, unlimited text, picture and video messaging, free GPS Navigation and 450 voice minutes with unlimited incoming calls, nights and weekends and mobile-to-mobile. Customers also can opt for the Premium Plus Family Plan for $179.99, which includes two lines with unlimited minutes and messaging, 5GB of data per line, Phone Replacement and GPS Navigation.

For more information about the LG Apex and The Belief Project, visit uscellular.com.
About the LG Apex
The LG Apex is a cool productivity tool that runs on Android 2.1 and features a 3.2-inch durable tempered glass touchscreen that responds to a feather touch with vibration feedback. The screen also boasts luminous sensors that adjust brightness depending on light conditions and shows off the dynamic, animated live wallpaper. Five customizable home screens allow customers to create shortcuts to their favorite apps and widgets.  Its stylish and functional design offers a QWERTY keyboard that slides out to make typing and texting easy.

Backed by U.S. Cellular’s high-speed nationwide network, customers can browse and download thousands of applications in Android Market that allow users to customize their phone to fit their lifestyle. Customers can also access popular Google applications, including Google Maps™ with its turn-by-turn directions and Google Voice Search™ that helps them locate anything without a single key tap. The LG Apex’s 3 megapixel autofocus, flash-ready camera/camcorder comes with a panorama mode that lets customers take up to six side-by-side shots to build a sweeping view.

The Wi-Fi enabled phone also comes with an MP3 player, and customers can easily organize their music library, repeat and shuffle their favorite songs. They can even multi-task, playing music in the background while simultaneously e-mailing, texting or downloading videos. A video player is included for WMV, MP4, 3GP and 3G2 formats.

The LG Apex will retail for $79.99 after an $80 mail-in rebate and will be available Nov. 19 at U.S. Cellular locations and at uscellular.com.

About The Belief Project
Launched Oct. 1, The Belief Project recognizes customer loyalty with national bundled rate plans that offer customers the freedom to enjoy industry-leading benefits without signing continuous contracts – like new phones at promotional prices every 18 months that can be accelerated with points.
With “no contract after the first,” new customers fulfill an initial two-year commitment and never have to sign another contract again. Existing customers who switch to the new Belief Plans can simply finish the remainder of their term without extending their current contract.

Customers automatically get valuable rewards just for being a customer that can be used for faster phone upgrades in as little as 10 months depending on their Belief Plan. Rewards can also be used to get additional lines, phones, accessories, and ringtones.

The Belief Project also includes the industry’s only Phone Replacement program. If a customer’s phone accidentally breaks or stops working, U.S. Cellular replaces it with the same or similar model at no additional cost. Customers also can save up to 5 percent on their monthly plans for setting up autopay and paperless billing.

These innovative initiatives were developed to address consumers’ common frustrations with wireless, elevate the customer experience and create a human relationship, not a contractual one. For more information about The Belief Project, visit uscellular.com.