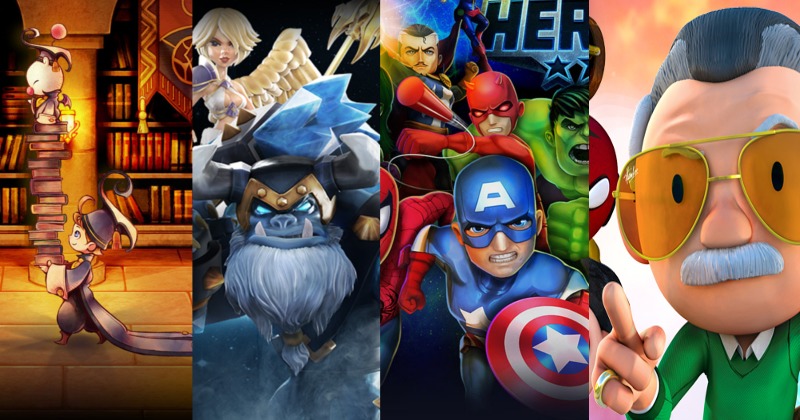 Greetings Gamers! It’s been a while since we last had our weekly Android gaming recap and while there have indeed been a ton of new and updated games that have come our way, this time around, we’re taking a different route. This time, we’ll be taking a closer look at some of the games that have yet to come our way, very soon or not so soon, especially those from the big names in the industry. So get your pens and wishlists ready for this edition of Level Up, the ghost of games yet to come!

We’re starting off with a heavyweight immediately, because what could be heavier than the combine names of Square Enix and Final Fantasy. While the revered JRPG franchise has already made its way to mobile, from the very first all the way up to the sixth, even including FF IV The After Years, Record Keeper will still be a blockbuster. Sort of. That’s because the game will let you experience again, or for the first time, the most memorable moments and characters of the entire Final Fantasy franchise. Now, before you start hyperventilating about seeing Cloud in all his 3D glory, be aware that this game will reduce all, and we do mean all, FF characters into pixelated versions of themselves. But if you’re up for a walk down memory lane, whatever the graphics, then Record Keeper might have something for you.

Gameplay-wise, Square Enix isn’t revealing much aside from the fact that it uses the somewhat turn-based Active Time Battle system. Players will half to fight their way through key moments in Final Fantasy history. It will be interesting to see how they have all lumped them together into a coherent tale.

Final Fantasy Record Keeper is set to launch sometime in Spring this year. The game will be free to play but, since DeNA is involved (and we’ll see it again later), there might be some in-app purchases, contrary to Square Enix’s usual setup.

There was a time when Spacetime Studios was the studio for mobile games, particularly because of how it blazed the trail of MMORPG-like games like Pocket Legends and Space Legends. The studio came upon hard times and recently announced that, while most of its online mobile games will continue running, they will no longer be updated. The studio is refocusing its resources to an upcoming game that it just announced: Call of Champions.

As the name might hint, this game is unabashedly a Multiplayer Online Battle Arena or MOBA. But do not be too quick to judge the game by its genre. Spacetime Studio claims to have ripped apart the MOBA idea and put it back together with the elements that make sense for mobile gaming. For example, you get only 5 minute skirmishes, which might be perfect for a coffee break. Heroes come fully equipped with the skills that you give them outside of battle, so that you don’t waste time trying to unlock those within the 5 minute limit. Of course, you still get to customize your characters and get some epic loot.

The game does have some unique features, like an “Orb of Death” that you can push to your enemy’s base for victory. Sort of like reverse football. As for heroes, there are 8 realms, each with 5 classes, giving you a total of 40 to choose from. The game will launch sometime this year for free but, given the nature of the game, do expect lots of IAPs.

What if, instead of dishing it out on others, you dish it out *with* others? If teamwork is the name of your game, then Marvel’s upcoming game might be more to your taste. Partnering with DeNA (yep, it’s them again) this time around, Marvel is taking a different approach than what it did with Contest of Champions. “Chibi” characters, cooperative gameplay, and a lot more heroes and villains to fill your team. Marvel isn’t saying much about the game just yet, but expect it to explode into Android sometime this year.

What if you’re tired of the popular guys and gals in masks and spandex? Well, good old Stan Lee has just the thing for you. From the creative mind that gave birth to Spider-man and a whole host of other comicbook characters, most of them from Marvel, comes Hero Command. Stan Lee’s, of course. This mobile game, which will be even more cutesy than Marvel Mighty Heroes, puts you in the shoes of superheroes you’ve never heard before, battling villains you never knew existed. These new characters have been lovingly crafted by Stan Lee himself just for this game, so don’t be surprised if you don’t recognize anyone. But then, that’s the entire point of this fresh, new, and probably comical superhero game.

This game doesn’t come from Marvel’s shelves but from a relatively less known studio named F84 Games. Stan Lee’s Hero Command will launch in just a few weeks, so be sure to check it out when it does.

That’s just the tip of the iceberg of games coming to us this year. But while we wait for these titles to appear on Google Play Store, don’t forget to join us at our MWC 2015 tag portal for next week’s coverage of the biggest smartphone show of the year!