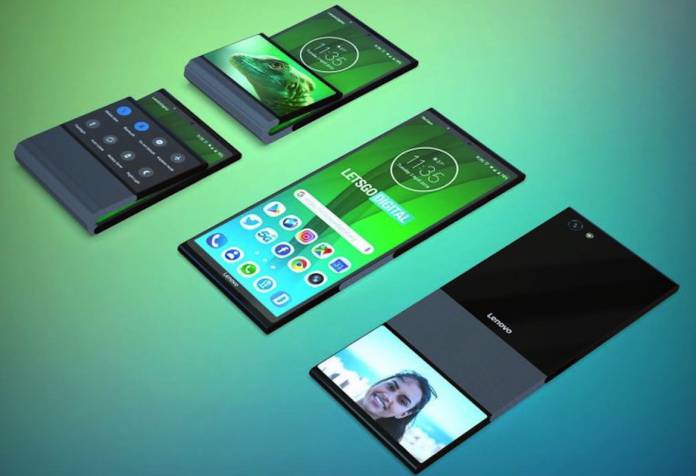 Lenovo isn’t exactly on top of the mobile game but it comes up with some interesting pieces. If not its own Lenovo smartphone, there are several Motorola Moto phones to choose from. The company doesn’t slack and so we believe this idea of a foldable phone. The concept was first made known to us back in 2017 when a Lenovo foldable folio tablet prototype was shown off in a video. Another hands-on video surfaced a year later but of a different design.

This week, we’ve got renders of the upcoming Lenovo foldable smartphone with a second display. The secondary screen seems crucial to making this a real, working foldable device.

The foldable clamshell phone patent has been registered by Lenovo. It may remind you a bit of what Motorola showed off before but with the addition of a flexible hinge.

The product renders below by LetsGoDigital give as an idea of the future Lenovo foldable phone. Details on specs are scarce but right now, we only care about the design and how it can have an advantage over other foldable phones we know.

The smartphone shows a longer phone when unfolded or opened. While the Huawei Mate X and the Samsung Galaxy Fold opted for a more squarish design, here’s Lenovo making an elongated device.

The design means a one-hand operation will still be possible. Compared to other bigger foldable phones with side outward or inward folding design, the Lenovo foldable phone may be more compact and handy.

The foldable clamshell smartphone patent was filed last year in September thru the Global Design Database of the World Intellectual Property Office (WIPO). A total of eleven sketches of a foldable phone with a flexible hinge have been submitted.