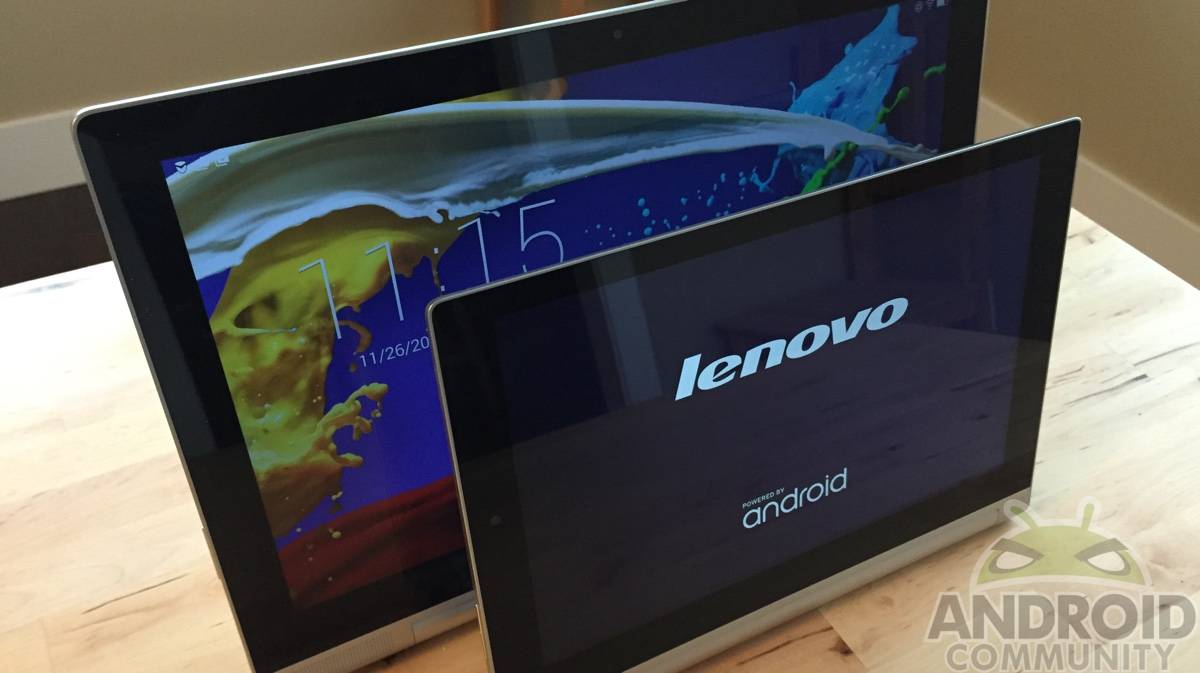 Lenovo has made a big impact on the Android world with their Yoga tablets. Most of the attention is paid to the design, where a cylindrical battery occupies a side (or bottom… or top) of the Yoga Tablet. Now that Lenovo has released their second iteration of their funky tablet, the Yoga Tablet 2, is it still worth our praise and admiration? Does a battery/handle/stand straddle the right lines, or has Lenovo fallen victim to malaise in not updating their hardware enough?

There is no denying the Yoga Tablet 2’s unique design. A very prominent cylinder occupies one end of the tablet. No matter how you look at it — or hold it — the Yoga Tablet 2 is a unique experience.

If you look past the side-battery, Lenovo has kept the integrated stand. The Yoga Tablet 2 has a simple pull-out stand that has a few settling points where Lenovo thinks you’d be most comfortable watching media; and make no mistake, the stand is meant for media consumption in landscape mode. It will hold your Yoga Tablet 2 in any position, though. 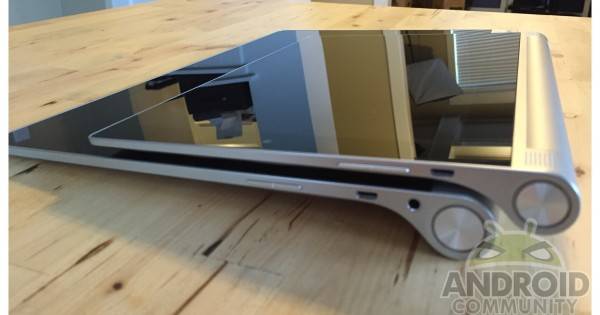 The yoga Tablet 2 Pro is similarly styled with regard to the battery and stand, except the Pro model has a button that releases the stand. It’s a bit more awkward than simply rolling the stand off the side.

If one thing can be said for the Yoga Tablet 2 and 2 Pro, it’s that both have front-facing speakers that shine. For watching a movie, they really come in handy. 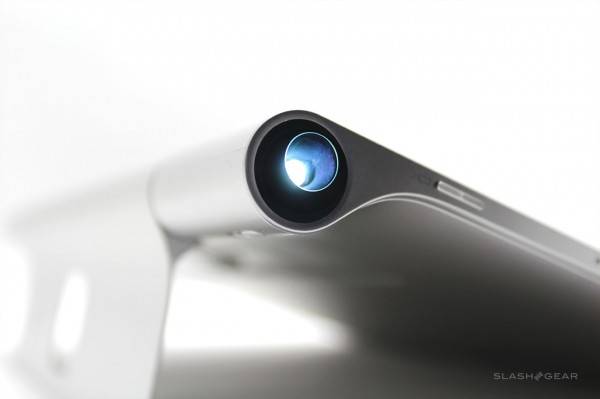 Neither the Yoga Tablet 2 or yoga Tablet 2 Pro are spec-heavy washouts. What they both offer is respectable hardware that keeps up admirably.

Here are the specs for both:

Both tablets operate on the Android platform, obviously, but they’re not stock. At first blush, the tablet interface looks dated, almost like Android Honeycomb. Though KitKat is the underlying platform, the UI needs work.

To be quite blunt, the UI smacks of iOS; so much so that a long-press on an app brings up the very iOS-like delete option. The included app icons, like the ones Lenovo cobbles in, are also rounded squares, just like an iPad.

That’s not a knock on Lenovo, but it feels much less Android that it could. Android purists may not enjoy the UI here, but I really doubt that’s Lenovo’s core market with the Yoga Tablet 2 or Tablet 2 Pro.

On the software end, Lenovo has packed in quite a few apps meant to make life easier. Apps like SYNCit let you back up documents to an SD card. That’s something many novices won’t know how to do via a mobile platform, so I consider it a smart inclusion by Lenovo.

SHAREit is Lenovo’s means of syncing files between devices. You can share photos, music, videos, contacts, or files to any other device with the app installed. It’s a great option for Lenovo purists who have a Lenovo Yoga Pro computer or the like.

Lenovo’s Security HD app is handy for power users. In the app, you can find which other apps are taking up memory and shut them down, and get a quick look at available memory through the app manager section. In the app manager section, you can also uninstall apps, move them between memory and SD cards, as well as freeze them (that stops them from working). An Ad Blocker feature also kills annoying ads both in apps and in the browser.

Another neat feature on the Yoga Tablet 2 and 2 Pro is the multi-window white-list. A small icon sits at the bottom left of the screen, and in it are apps you want to use in multi-window format. It’s not new — we see this on many Samsung devices — but Lenovo’s take on it is the cleanest we’ve seen to-date. 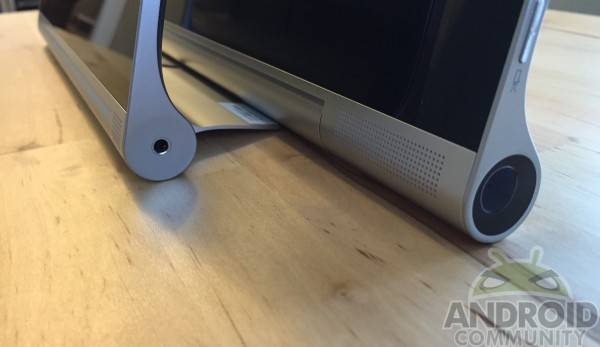 The batteries in these two Lenovo tablets are massive. Battery life is typically a sticking point in a review, but the Yoga Pro 2 and 2 Pro are disgustingly long-lasting. Both offer larger-than-average battery size, and while that’s a trade-off for a super slim tablet, it’s a welcome one. There’s almost no point in showing battery life stats.

One word of caution, keep in mind the SHAREit app is highly consumptive of battery life. In using it a few minutes, it sapped energy in what seemed to be a rapid clip. Even at that, the battery life on the Yoga Tablets are impressive. Lenovo says they can deliver 18-hour-plus battery life in use, and I won’t argue that. 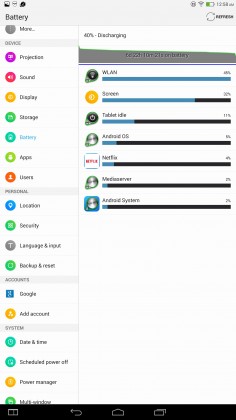 I can’t complain about these tablets much; they’re just that good. While I admit the UI is dated and a bit clumsy, it’s not bad. The touchscreen is also responsive, but better suited for navigating web pages rather than intense gaming.

For someone who likes to watch videos, these are two great tablets. The included stand is incredibly handy, and the front facing speakers are superb. I would go so far as to say the Yoga Tablet 2 Pro could double as a nightstand TV if you didn’t have room for a proper one.

The projector on the Yoga Tablet 2 Pro isn’t wonderful, but it doesn’t let me down. You could watch a movie, sure, but it’s more useful for casting app content or pictures on a wall. If you have a suite of productivity apps you like for Android, this is a really nice option to have for enterprise.

If you’re going to be gaming, or doing some heavy lifting with apps, this may not be the tablet for you. The quad-core Intel processor is underpowered for heavier tasks. I didn’t find the experience lacking, but it wasn’t nearly as smooth as I’d have liked or experienced on other Android tablets. There’s enough RAM and memory to keep things humming along nicely, but the processor doesn’t do them justice. 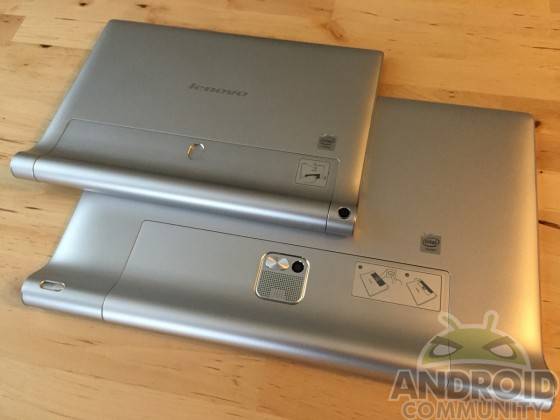 For media consumption or web browsing — no problems. If you’re going to play a heavy FPS game, stuttering and buffering will probably exist.

In the case of using the Yoga Tablet 2 Pro as an actual tablet — you can, but it’s cumbersome. I like it for the enterprise space, because the larger screen would be great for reviewing documents, but for browsing Facebook or Twitter, it’s overkill. The Yoga Tablet 2 is just fine as a “regular” tablet; just keep in mind the battery bulge is always there.

One thing I enjoyed about both tablets was using it in landscape on my lap. The battery bulge provided a nice prop, and the larger screens made typing on-screen pretty easy. 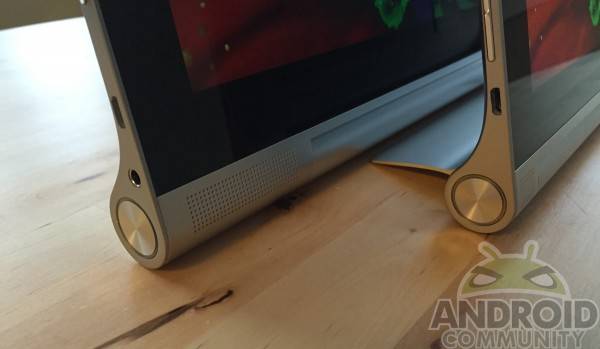 If you’re a hardcore Android fan who knows what CyanogenMod is all about and gets tucked into long debates on Google+ about the merits of the new Lollipop keyboard, you may not be happy with the Lenovo Yoga Tablet lineup. There is enough change here to dissuade you. While the underlying core is still Android, Lenovo’s overlay is very noticeable.

For the rest of the world, these two tablets are an easy recommendation. Though I’m not a fan of heavy Android skins, Lenovo has done it in a crafty way. Like the easier-to-grasp iOS, everything is right up front on the Yoga Tablet 2 and 2 Pro. I think for the average user, the learning curve here will be minimal. 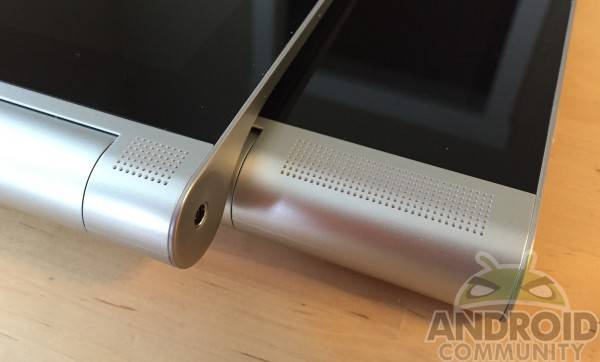 The larger screen on the Yoga Tablet 2 Pro takes a bit of getting used to. I definitely don’t think Android is in a place where it can replace a laptop, but if you use Google Drive as a means to be productive day-to-day, I could see this replacing a Chromebook for many users. With a bluetooth keyboard, this is just about to that point.

The Yoga Tablet 2 is $249. The Yoga Tablet 2 Pro is $499. Those prices are hard to argue as being out of line, or out of touch. For what amounts to two very adequate tablets, the pricing is right, and that’s important for the market Lenovo is after.