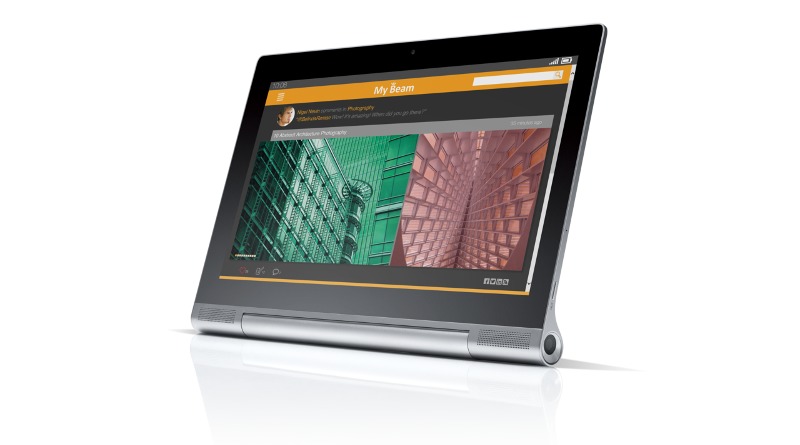 Of the new Android tablets that Lenovo is unveiling today, the Yoga Tablet 2 Pro definitely takes the cake. While the new Yoga Tablet 2 represents an incremental upgrade to Lenovo’s 2013 line, this Pro version makes a huge leap forward. With a pico projector hidden in the hinge, a JBL subwoofer on the back, and a large Quad HD display, this tablet is unambiguously built for the ultimate multimedia experience. Plus, it was designed in collaboration with Lenovo product engineer Ashton Kutcher to boot.

Yes, you read that right. The Lenovo Yoga Tablet 2 Pro has its own pico projector, situated at one end of the large hinge. This allows the the tablet to project a 16:9 high image, turning any surface into a 50-inch theater screen. The position that the tablet will take when using the project might be a bit odd, but, considering how thin the Yoga Tablet 2 Pro is in other parts of the body, there is no other conceivable location to stow away that projector. But even if that feature doesn’t interest you much, the 13.3-inch Quad HD display, with its 2560×1440 pixel resolution, still might.

But video is only half of the multimedia experience, and Lenovo wants to also deliver on the other half. For audio, it has the same dual front-facing speaker set up, both large-chamber 1.5W stereos, boosted by Dolby Audio and Wolfson Master Hi-Fi. But wait, there’s more! On the rear of the tablet, you will find a subwoofer. Yes, a subwoofer on a tablet. And not just any, but one with JBL’s brand on it. That one uses 5W, giving a total of 8W for a portable surround system.

While the Yoga Tablet 2 Pro differentiates itself from its non-Pro siblings in terms of multimedia prowess, the rest of tablet’s internals are largely the same. Not that they’re bad, just not exactly what you’d expect to drive the tablet. The tablet is powered by an Intel Atom Z3745, a quad-core that can run up to 1.86 GHz. RAM is at 2 GB and internal storage is, thankfully, 32 GB, with an option for 64 GB more via a microSD card. The same 8 megapixel and 1.6 megapixel camera deck the back and front, respectively. Lenovo doesn’t mention the exact capacity of the battery but advertises to last 15 hours on a single charge, or 3 hours of continuous playback.

The Lenovo Yoga Tablet 2 Pro can be purchased from the company’s online store, but it won’t be available until the end of October. When it does, it will come in a Platinum Silver coating and a price tag of $499.99.