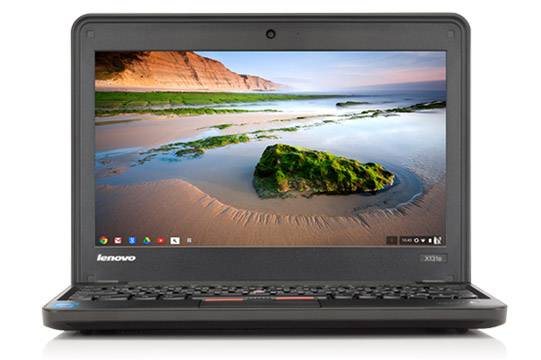 Lenovo is aiming for the education market with their latest notebook announcement. The particular notebook is a Chromebook, specifically, the ThinkPad X131e Chromebook and it sports a rugged design. Some of the rugged features include a rubber bumper, reinforced ports to minimize chances of accidental damage and a stronger keyboard that protects the keys from being removed.

Another rugged feature touted by Lenovo deals with the corners. Lenovo has said the corners have been made 33 percent stronger in an attempt at reducing damage when it comes to drops. Otherwise, the ThinkPad X131e Chromebook sports an 11.6-inch (1366 x 768) anti-glare display, Intel processor, WiFi, three USB ports and a battery life that is described as being “for the entire school day.”

“Chromebooks are widely used today in primary and secondary schools, and they make an ideal one-to-one device because they’re more cost effective, easier to manage and maintain than traditional laptops or tablets,” said Caesar Sengupta, director of product management, Chrome OS, Google. “Lenovo has a great reputation in schools for making durable and reliable laptops, so we’re excited to partner with them to introduce the ThinkPad X131e Chromebook.”

Lenovo has these available for an intended audience of schools, both primary and secondary schools. For that, the price is set at 320 Euro, however that is volume pricing and individual purchases will likely be with a higher price tag. Lenovo is also allowing for some customization with the ThinkPad X131e. To that point, it was said the will offer a “number of customization options.”

These include custom colors as well as school logo etching. Those schools purchasing will also be able to have asset tagging services available which should help to keep track of the notebooks when they leave the school property. This Chromebook also has a low-light webcam, HDMI and VGA ports and will take advantage of Google Apps for Education services straight out of the box.