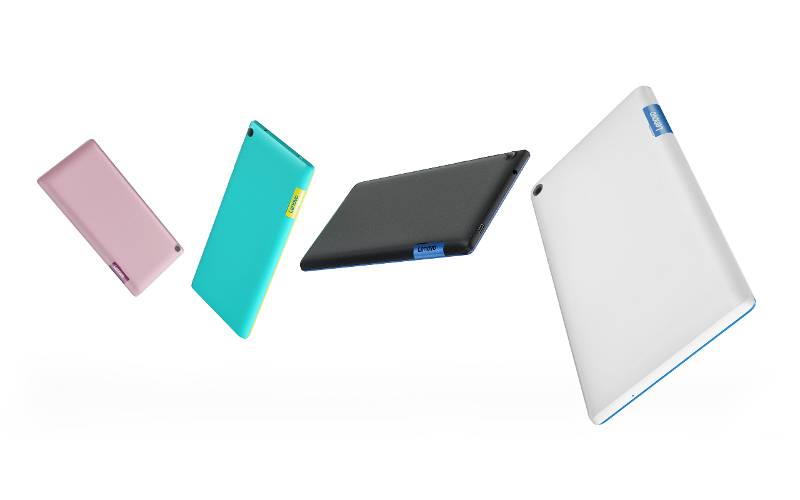 Lenovo has a few wares to show off at MWC 2016 and, unsurprisingly, some of those consists of Android slates bearing the latest Marshmallow version. Although these tablets are pretty much in the mid-range category of devices, that doesn’t mean they are lacking in power and features that would appeal to anyone, from professionals to parents and kids. The Lenovo TAB3 10 Business carries a load of features that clearly earmark it for the workplace while the TAB3 7 and 8 have been designed to cater to the needs of the whole family.

Let’s start from the very bottom, at least when it comes to size. The Lenovo TAB3 7 is obviously the smallest of the bunch, with a 7-inch 1024×600 “barely HD” screen. It is also technically the least equipped, with a 64-bit quad-core 1.0 GHz MediaTek CPU paired with 1 GB of RAM. But you know what they say about being small and terrible. In this 7 incher’s case, that transfers to being a rather tough tablet, with an IP52 rating for water and dust proof survivability. A 5 megapixel camera is on the rear while a 2 megapixel shooter is placed on the front. The battery pack is rated at 3,450 mAh. The TAB3 7 features a gesture-based feature that lets users launch an app right from the start screen by drawing a letter.

The Lenovo TAB3 8 doesn’t stray too much from this mold. The larger 8-inch screen has an equally but only slightly higher 1028×800 HD IPS panel. It’s still powered by a 1.0 GHz MediaTek quad-core and still paired with 1 GB of RAM. The battery is much larger here, at 4,290 mAh. The rest of the specs are mostly similar, with the same 5 and 2 megapixel camera pair and IP52 score. In addition to the same Gestures feature of its smaller sibling, the TAB3 8 also adds Facial Recognition security for unlocking the device.

What really binds the two together is their family-friendly features. While Android itself already has such features in place, the Lenovo TAB3 tablets really put them front and center. Android’s multi-user functionality is put to great use to make sure that each family member has his or her own private space. The tablets even come preloaded with apps and games for the little ones. The screens’ Adaptive Display technology helps filter out the blue light and adjusts depending on the content to put less strain on the eyes, important especially for children. Both have

While the TAB3 7 and 8 were made for all types of users, young and old, the Lenovo TAB3 10 Business is all about serious productivity, though of course nothing prevents it from being used for some fun as well. Here, a more powerful 1.3 GHz quad-core, still a MediaTek, powers the device, with 2 or 3 GB of RAM to help. The 10.1-inch screen now bears a 1920×1200 Full HD resolution, great for watching hi-res videos, or making business presentations. There’s 32 or 64 GB of storage, depending on the configuration. The cameras have been bumped up somewhat a bit, with 8 megapixels on the back and 5 megapixels on the front. The 7,000 mAh battery is advertised to last up to 12 hours, which is plenty of time for both work and play.

But a tablet isn’t made with hardware specs alone. The TAB3 10 Business naturally features some of Android’s and Lenovo’s best when it comes to enterprise-ready software and hardware, the latter represented by the dual-band WiFi, NFC, and GPS features. Android for Work is preloaded on the tablet for creating different profiles for work and for everything else. Hardware encryption is added on top of security features like facial recognition. At the same time, the tablet offers the same convenience as its smaller cousins, like Gesture-based app launching from the lock screen.

The Lenovo TAB3 7 with 16 GB of storage and LTE connectivity starts at $129. The Lenovo TAB3 8 will have two different price tags, $99 for the Wi-Fi only version and $149 for LTE. Almost like a ladder, the Lenovo TAB3 10 Business has three price tiers. The Wi-Fi only model with 2 GB of RAM goes for $199 while the LTE capable version will $249. At the highest rung is the 3 GB RAM LTE option at $299. All three tablets will be available starting June this year.