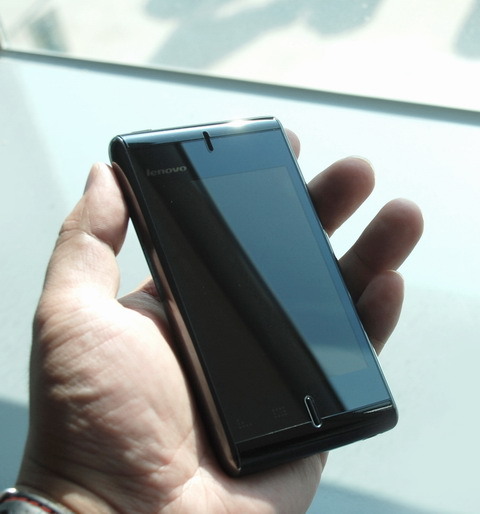 An image of Lenovo’s work-in-progress Android smartphone for China Mobile, currently named OPhone, which will use the open-source OS together with support for China’s high-speed TD SCDMA network.  Little is known about the device, aside from what can be gleaned from this image; that means a large touchscreen interface with touch-sensitive controls and what’s likely a single hardware ‘Home’ button.

This Lenovo handset will not be the only OPhone, however.  The project is China Mobile’s attempt to marry the open-source OS with the Chinese government’s favored 3G standard, and refers to the OMS (Open Mobile System) they have developed.

“Given these (iPhone, Android, Symbian) developments, it is becoming very clear that developing a proprietary handset operating system is essential for dominance of the mobile Internet market in China. At the moment, China Mobile is in a comparatively weak position without its own operating system. With its own operating system, China Mobile will be able to commission customized phones from handset makers and keep its hand strong in negotiations over profit sharing. There is even the possibility that China Mobile may move into manufacturing handsets itself” Source familiar with situation

Unfortunately the nature of TD SCDMA means that the Lenovo handset, in its Chinese form at least, will not be available outside of the country.  However we can hope that Lenovo will consider developing a US/Euro version of the smartphone.