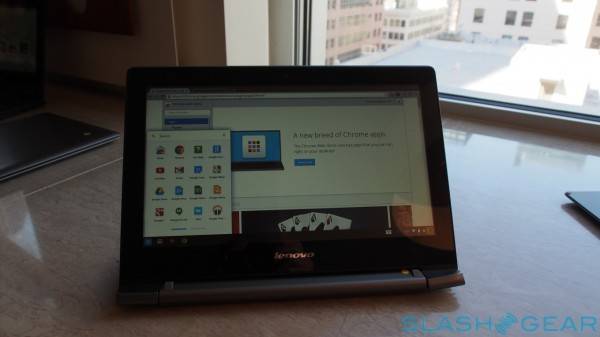 Lenovo will soon be introducing a duo of Chromebooks to the market, the N20 and the touch-enabled N20P. Unlike its previous Chromebook models, however, these two are explicitly designed to appeal to a broader range of consumers.

This is not the first time the PC maker has made Chromebooks, but previous iterations were all marketed for the education sector. This time, however, Lenovo is aiming to bring Google’s Chrome OS-toting device line to the mass market. Our friends at SlashGear were able to snag a first hand look at these Chromebooks that will be arriving next quarter.

Inside, the portable computers run on an Intel Celeron, specifically of the Bay Trail lineage. Although no exact clock speed was given, the RAM that teams up with the CPU was noted to reach 4 GB. As with other Chromebooks, this one has limited internal storage, 16 GB only, though that is augmented by 100 GB of cloud storage on Google Drive. But if you do need more local space, you might have to make do with a microSD card, and maybe an external drive connected via one of two USB 2.0 ports on the Chromebook. Other ports on the device include HDMI output and a headphone/microphone jack.

The screen is of particular interest. Both come with 11.6-inch displays with similar 1366×768 resolutions. However, the Lenovo N20P’s screen supports 10-finger multitouch while the N20 does not. The two also differ in terms of overall form factor. While the N20 follows a conventional Chromebook, in other words notebook, design, the N20P resembles more Lenovo’s line of YOGA tablet/laptop hybrids. However, the hinge only rotates at a maximum of 300 degrees, just enough to prop up screen like a keyboard-less display but not enough to use it flat like a tablet.

Fans of Lenovo’s ThinkPad keyboards might be a bit disappointed to find only an AccuType keyboard, but it seems to still be easy enough to type on but not an absolute pleasure. Lenovo is advertising the battery to last up to 8 hours on a full charge, which isn’t exactly surprising considering Chromebooks are designed for less resource-intensive operations.

The Lenovo N20 is scheduled to arrive around July and carry a price tag of $279. The touch-enabled N20P, on the other hand, will come a bit later in August and will naturally cost more at $329. Lenovo plans to make 3G and 4G models available in the near future, but, unfortunately, won’t be selling them within the US.